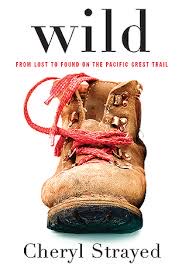 Oh, Wild. For a book that I hold in my heart with a lot of fondness, I found upon re-reading it that I really didn't remember much about it at all. It also shocked me that I had only read it once before, but since half of the content is fairly similar to Strayed's novel (Torch), I guess I have kind of read it one and a half times at least.

I also read it when it was fairly new out, and before it became this whole big thing. In one of the episodes of the Gilmore Girls reboot (which itself was *gulp* over two years ago now!), Lorelai goes to 'do Wild' - i.e. find herself on the PCT, along with a whole load of women 'going through stuff'. This is obviously meant as a kind of joke on women who try to emulate an experience that was life changing for just one person ('Movie or Book?!' the women ask each other, trying to find their correct group), but it also helps to show the reach the novel (and, I guess, the movie) have had since I last read it.

I still haven't seen the movie, by the by, for no reason other than it's not available to stream anywhere and I don't really want to spend money on it. I'm sure it's good because Reese Witherspoon is ace, and I'm looking out for the opportunity to watch it whenever I can. But, for now, there is always the book.

And, you know what? It's still a good book. I'm not sure that it still had the same impact on me that it had back in 2013 (wow), but I think I need it less than I did then - I have a much better idea about myself than I did 6 (again, wow) years ago, and I feel somewhat that I need it less than I did then. Nonetheless, it's still charged with emotion, and very inspiring and heartbreaking, and you know, all of that good stuff.

This wasn't really a review, I realise, so much as a review of me, but if you want more of an idea of the book you can take a look at my vintage review of 2013 (again WHAT EVEN). I completely understand this book's inclusion on the 30 before 30 list, because of its inspirational and uplifting essential message - we all have the power to change our own lives, if and when it's needed.
Posted by Laura at 08:30