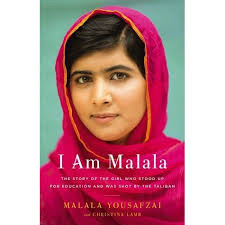 Prepare yourselves, good people, for a raft of posts about books-I-don't-really-remember. It's going to be a wild ride for us all as we venture down the hazy fog of my damn memory. Let's get started.

Having said that, I do remember I Am Malala fairly well because of how impressive I found it. I'm not sure what I was expecting, but all I knew about Malala before reading this was that she got shot in the head when she was 15 (and since this happened in Pakistan, I doubt I would have known even that had she not been flown to the UK for treatment) and, you know, I don't have high hopes of teenagers.

This, I soon realised, was foolish. Granted, this book was written 'with' (i.e. by) someone else, but Malala's story is incredibly interesting and important and not very teenager-y at all. The first half of the book, in fact, is quite literally not teenager-y - it essentially tells the story of both the history of Pakistan as well as the history of Malala's family. I thought this was an amazing editorial decision - not only because, as Malala is so young, her family's story is her story, but also because, as an ignorant Western reader, I didn't really have a clear idea of Pakistan's recent political history. I have a much better idea now, but also more importantly, Pakistan's political history is fully pertinent to what happened to Malala.

And then, we get to Malala. Malala, I have to say, is kind of incredible. It's incredible for any person to face death and then come out of it stronger, but Malala's strength had been present long before she was shot in the head - in fact, it's sort of the reason she was. Malala was, in Pakistan, a young advocate of education for women (and, to be fair, everyone, but no one's trying to stop men learning) and it was her speaking out that got her shot in the head. She is a force of nature, really, unwavering in her belief that education rather than war is what the world needs to get better.

I would, then, really very highly recommend this book as a biography and a way to make yourself feel very not-accomplished compared to this amazing teenage activist. This made me feel all activist-y and angry and wanting-to-change-the-world-y, and although I really haven't done that yet (although sometimes being a smug vegan makes me feel that way, at least a bit) you never know what's round the corner!
Posted by Laura at 08:30