Well hello there, pals! How are you this fine, freezing February day (ok, night)? I know, I know, I started this year with all the right words and intentions of a recommitment to blogging, but, well, life gets in the way sometimes, you know? I have been, it feels, very very busy and sociable and taking opportunities when they come and just trying to kind of like live as well as get ALL OF THE THINGS done.

And then, well, this happened: 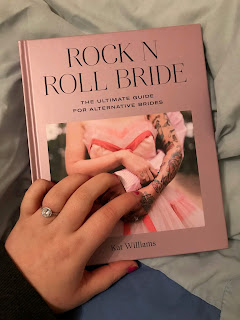 I GOT ENGAGED (and obviously immediately bought [got fiance to buy] a book to work out how to do a wedding cause idk). People like to hear engagement stories, I have discovered, and mine is this - we were on holiday and it was fiancé's birthday, we went for a lovely meal and a (freezing) walk along the seafront, and instead of proposing in either of those places he waited til we were back in our hotel room to awkwardly do it. As we're both pretty awkward bears it felt pretty right, and I couldn't be happier right now!

And couldn't have thought less about blogging since then BUT STILL. Here I am, I am here. Let's get down to January reads - which includes the above book which I somehow forgot to add to my main photo but still read in its entirety within about a day because, you know, me. 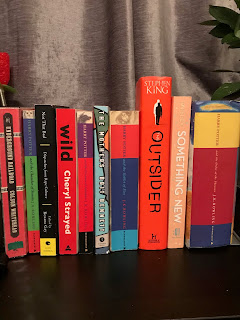 Sooooo many books, and, I now realise, so much blog work to do... I'm on it, I swear! (maybe). Let's just talk about the books, shall we?

The Underground Railroad by Colson Whitehead
This was a 30 before 30 read so I'll discuss it in more detail (ahem... maybe... I actually can barely remember it now, shiiiiiiiiit...) but I can't remember being overly impressed by this? Hence, I suppose, my poor memory of it. Trying to rack my brains for a memory of this book is getting embarrassing now so I'm just going to stop and cobble together a review (LOL) at another point!

Harry Potter and the Chamber of Secrets by JK Rowling
Still going strong on re-reading Harry Potter before 30 (as I'm sure you can see!) and yep. This book is still v good. IT'S HARRY POTTER.

Not That Bad: Dispatches from Rape Culture by Roxane Gay (ed.)
In an almost direct contrast to The Underground Railroad, I kind of couldn't stop thinking about this book of essays regarding rape. This was very difficult to read at some points, and left me feeling all outraged and fired up and like I wanted to do something about this shit, which is super rare for me, a lazy person. Although the subject matter is so difficult, I think this book is vital in letting survivors know that they are not alone, that their reaction, whatever it was, is allowed, and for everyone to realise that This Shit Has To Stop.

Also, fuck all those fucking men. (Not literally).

Wild by Cheryl Strayed
Oh, Wild. A re-read for 30 before 30 (so a re-review is coming, I guess!), I had only read this once before but had cherished its memory ever since then. Upon re-reading, it's not at all as I remembered it (and interestingly is now tied into memories of Torch, Strayed's novel, now) but I still pretty much loved it, and gobbled it down. More thoughts to come soon...

Harry Potter and the Prisoner of Azkaban by JK Rowling
Yep. I really couldn't get enough Harry Potter this month. This book is still v good too, in case you were wondering.

The Mothers by Brit Bennett
Another 30 before 30 read! I really liked the way this novel was framed, and actually I just enjoyed it quite a lot - it's a fairly basic story (starts singing 'tale as old as tiiiiiiime') but its framing and also excellent characters make it just that little bit more special. Once again, I will review this eventually, but exactly when remains to be seen mwahahaha.

Harry Potter and the Goblet of Fire by JK Rowling
What can I say? It's another Harry Potter. Also still v good, and possibly still my favourite? Who can say.

The Outsider by Stephen King
See, this is a Stephen King (obviously) so by law I have to fully review it? But.... so much to do. So very much (we'll see). This was actually an incredibly creepy story and I couldn't quite bear to read it when I was alone, which is the best kind of King. I'm relieved to know that all of that King reading hasn't immunised me against being scared of things still, although I could have done without some of the images that this book left me with *shudder*.

Something New by Lucy Knisley
Because I am me, one of the first things I obviously had to do upon becoming engaged was read Lucy Knisley's comic book on planning and executing a wedding. If I'm honest, it's something I have to do quite a lot anyway because it is just SO GOOD, but it felt important to read it at this moment of my life especially. I feel as though it's a useful manual on how not to lose your head (or all your money) over a wedding, and I still just love it ever so much.

Aside: Knisley's new book, on having a bebe, is out THIS MONTH and I couldn't be more excited. I realised yesterday that I would soon be in the month that I would have my hands on new Knisley, and excitedly looked up the release date and... it's basically at the end of the month. SIGH but also hooray!

Rock N Roll Bride by Kat Williams
My guy got amazon vouchers for Christmas and his birthday (I NEVER get amazon vouchers because I am embarrassingly easy to buy presents for) and so when I broadly hinted I would like this book he offered to get it from me out of them (what a peach!) This was pretty good - it has a lot of ideas for the bits and pieces of weddings, as well as good advice and (what might be invaluable for me) a checklist to try and keep everything on track and get everything done before ones wedding day. I also really liked that it's very much like 'you don't have to do all of the usual wedding things! Or any of them! Just do what you want!' plus I also like that there is a section on self care that acknowledges how stressful weddings can be because I feel that in my soul and I haven't really done anything yet! I was less enamoured that Williams seems to have studied at the Barbara Kingsolver school of I-did-this-so-I-don't-acknowledge-a-problem-with-it when it comes to changing one's name after marriage, but she does at least say that as long as you choose it, it's fine, so how can I argue with that?

Harry Potter and the Order of the Phoenix by JK Rowling
It. Is. Harry. Potter. Yeah? I do have a comment on this one, actually - I felt like I was more sympathetic towards Harry's angst this time around, and I don't know you guys, I feel like this book is really growing on me. GIMME ALL THE POTTER PLS.

So yea, January! It was quite the month, life wise, and I did not slack off on the reading, either! Do your worst, February...
Posted by Laura at 21:53