30 Books Before 30: #13 The Underground Railroad by Colson Whitehead 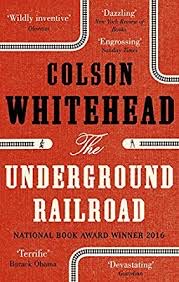 Hey, remember when I said I read a load of books that I now can't remember? This one is the main one I can't remember, something which I put down to reading it over the Christmas period when I was mostly high on sugar and cheese (ah, cheese). I have an inbuilt mistrust of books that have won awards because those things are almost always wrong, and, based on the lack of an impact this novel had on me, I have no reason to revise this feeling.

Ok, let's get through this the best way we know how. The story (wikipedia tells me) follows the story of two escaped slaves Cora and Caesar (thanks Wikipedia) as they both decide to and then do escape from the plantation on which they are enslaved. Many many events ensue, which kind of show the huge and disgusting and horrible impossibility of being an escaped slave in America in the 1800s, as obstacle after obstacle throws itself in their, and later just in Cora's, faces.

And just... Eh. I, of course, don't mean eh about slavery, or about violence faced by black people in America since, you know, they were bought and brought there until jut about the present day because of course that is bullshit and fuck that and just urgh. This book itself though, I just... Well. Apart from the fact that it apparently had no impact on me, I just didn't feel like it was, like, good enough to tackle the subject or to hold my interest or I don't know, maybe I'm just a monster?

I also felt that the violence in the novel became a little gratuitous in parts - which is not me trying to downplay the very real violence that we all know happened, so much as I almost feel as though fictionalising it almost makes the real things that happened less important. This feeling is something akin to the way I feel about Holocaust fiction, where I don't really think it should exist, except possible when written by the people directly affected by it. It's almost, to me, that some things are too horrid to be turned into fiction because it diminishes the real events in some sense.

Or maybe I just didn't really like this book.

Have you read this? Do you remember it? Can you tell me why it's supposed to be so great and make me reconsider myself? Thanks in advance!
Posted by Laura at 08:30