I spent (half of) my Saturday taking part in the London Bookshop Crawl, which was ace as always, and then the rest of my afternoon and evening blogging and watching Gilmore Girls, which is obviously the best way to spend a day ever ever ever.

Do you want to see the books I bought? What am I even saying, of course you do! 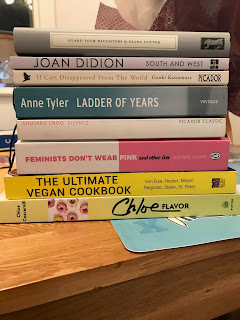 Ah my precious little booksies, how I love them. Hilariously, I didn't intend for this to even lead into my main topic for today, but hey, two of the books I bought were vegan recipe books, isn't that interesting?

As you may have guessed, Veganuary went really well. I had consciously been trying to reduce the amount of dairy in my diet for probably 6 months - a year before Veganuary, firstly because I knew I was going to try it out for the month, but also because I had started feeling a bit icky and weird after eating too much dairy (which may have just been the amount of fat I was consuming because you guys, I really really like cheese and also milkshakes). Eggs weren't really an issue for me because I don't really like them and only ever bought them to bake with, but I had already switched to vegan mayo before the start of the month, and I had also already switched to this awesome vegan butter that melts like real butter.

For some reason, in spite of all of the above, I thought this month would be really really difficult and I would die of starvation and all of that kind of rational thinking. Instead, you know what? I pretty much ate what I had previously, just without added cheese. It didn't hurt that literally every restaurant in the UK seemed to have jumped on the Veganuary bandwagon, and were offering beautiful vegan options. My fella and I ate out most weekends and I was always well fed, and I even called our favourite Chinese restaurant to ascertain whether there was egg in their noodles (there was not! Score!) There were only a very few occasions where I struggled a little to find a good vegan option, but even then, there always was one that I could cope with.

There are, of course, a few things I miss. I can basically only have dark chocolate now (although if anyone finds a good milk chocolate like alternative, please let me know) and vegan cheese is... not good, but I have found a vegan nutella that, honestly, tastes like nutella, and have already veganised yorkshire puddings and potato dauphinoise - two things which I haven't even made the animal product versions of. My sister called me the other day and, by the by, told me she was sad that I couldn't have 'normal' chocolate bars anymore and 'what about nutella?' (please see above for what about nutella). When I think about all the things I can't have anymore, I'm reminded of Jonathan Safran Foer's Eating Animals -

But anyway. As a welcome addition to following my own ethical compass (one that, honestly, I've been a ignoring for a while now), I felt amazing while I was eating vegan (possibly only because I was eating way less chocolate/sugar), and more alert and alive than I normally do in the winter for sure! I found that the people around me were accommodating and lovely (my mum is glorious and has gone wild buying all the vegan things she can find!) and that it was honestly so. much. easier. than I was anticipating it being.

So yeah, that's my vegan tale. It's not very dramatic, I just stopped eating a few things and started eating a few other things, but hopefully if this is something you're considering, this will help you to realise that it's perhaps not as intimidating as it might at first appear. I'm not really in the business of convincing other people to do things (bloody hate a preacher) but if this is something you're thinking about please let me know and I'd be happy to help you out and give you advice, if wanted! Now, if you'll excuse me, I'm going to go and eat some pancakes because hey, those can be vegan too! Mmmmmmm, pancakes...