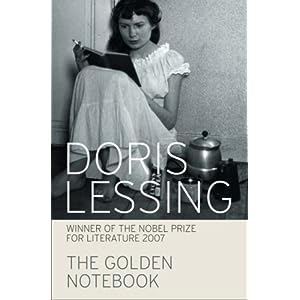 I referred to the 92 year old author of this book as 'Doris fucking Lessing' yesterday. I think it was an appropriate response to a book that bored me, then pissed me off, and then bored me some more, and I doubt she'd mind. Much. Apart from the fact that I was reading it as a co-joint-ready thing with Frances, I would probably have given up on it weeks ago, condemned it to the darkened depths of my wardrobe (that's where I keep books that have failed me like Uncle Tom's Cabin and Oliver Twist) but as it was, I soldiered on, and from this place (the giddy heights of having actually finished the damn thing) I'm really glad that I did. But not because it was good.

Oh no. Because, despite what Nora Ephron had to say about it, I just can't get on board with basically any of the book, and I think I know why that is. It's time for me to face the fact that Nora is, in fact, 50 years older than me, and her experience as a woman in society is so radically different to my own, that this book, which she felt related so strongly to her experiences (and which I'm sure many women of her generation could also relate to)really has nothing to do with my own experiences. And, I'm sorry to have to say this, but there was so little of the 'struggles' Anna faced that I found exciting or interesting, or even worth mentioning, and I kind of felt bleurgh-ish about the whole thing. There were so many views that I found objectionable, a half-hearted adherence to communism that was pretty uninspiring, and actually, quite a big lack of the feminism I expected to find.

Allow me to explain. The novel basically chronicles the goings on inside the head of Anna Wulf, a woman divorced from her husband who still keeps his name (fab) and which she keeps in four separate notebooks because she sees a separation between the four, or maybe just because she can't really consolidate them all into one because she is 'cracking up' as she puts it. Interspersed with these are sections called 'Free Women' basically chronicling the lives of, what I think is a fictional Anna (although Anna is already fictional, of course) her best friend Molly, and the lives of all the people that circle around them, albeit in a different way to the stories we get in the notebooks. Actually, I can't really fault Lessing on form here- I did think the concept of someone keeping four notebooks because they can't keep themselves together anymore was a fascinating one, and the deeper narrative of Free Women was also good. In a way, it sort of made The Golden Notebook like the personal journey someone goes through before writing a novel, which in itself, is, I think, a noble subject.

My question then, really, is this: where are the 'Free Women'? I guess that, considering the novel is set in the late fifties (it was published in 1962, so I'd imagine it was written then, or just after, too) Anna probably have been seen as a free woman- she is divorced, lives only with her daughter, and has sex with men whenever she feels like it, which kind of seems to be not that often, but she might as well because, what else is there to do? It's frustrating to read a book purportedly feminist when Anna, when she's not thinking about herself and her state of mind and being sad, is attributing every feeling to men- her depression because the man she loves has left her (to go back to his wife, but more on that later), joy because she has had sex with a man that she might love, discomfort because a man might know she has her period (don't even get me started on that one) and on and on and on it goes. And here's the thing- Anna doesn't need a man, she manages well financially and everything on her own, and while I realise that feminism is not about not wanting men or anything like that, the fact of the matter is that the way Anna feels about herself is directly dependent on how men (or particular men) feel about her, and that I really can't stomach.

And now let's talk about those married men. Anna seems to mainly have sex with the married men, although she doesn't love them and doesn't even enjoy it when she doesn't, hence making herself into, essentially a sexual plaything for them; only being cast-aside when they're done doesn't bother her, and she feels absolutely no guilt for their wives who are left at home. This alarms me- Anna seems to adopt an attitude of every woman for herself, at odds with the communism that she believes is right politically, and light years away from the later second-wave feminists in the 60s. Instead of properly thinking about the women being betrayed, Anna sees them all as a type- dull housewives who clean and cook and sit around watching tv, and who are all of course frigid; rather than considering that they are women too, who could easily be in different circumstances and, you know 'there but for the grace of God is she'. Anna continually sees herself as better than these women, but where men are involved, they're exactly the same- the wives make the man's life easier by being at home and raising his children, while Anna, the mistress, makes his life easier by satisfying his sexual needs. What they do apart from men is here irrelevant- their relationship with men is equally as dysfunctional and unequal.

What I think is really sad about this book is that Anna doesn't fully realise the value of her relationship she has with Molly. Her friendship with Molly is the most stable and arguably meaningful relationship in her life (possibly eclipsed by the one with her daughter, but definitely more equal). I'm not saying that this should mean that Anna shouldn't want a man as well, but when she does have one, Molly becomes peripheral, almost unimportant to her, which to me seems ridiculous. In these situations, Anna puts such an emphasis on the physical aspects of relationships, when surely a relationship that is fulfilling in every other way should be immediately tossed aside when she finds someone who will have sex with her. There is no danger, I should add, of Anna and Molly becoming lesbians, since Lessing's attitude to homosexuality is one that made me really uncomfortable at times. Anna has a gay male lodger (which is cool of her, in the fifties, admittedly) but in exchange for his lodging, she takes it upon herself to judge him and generally have a completely negative attitude towards the way he chooses to live, although far be it for anyone else to question her life. It's a kind of hypocrisy, and it made me feel a little bit ill, to be honest.

In the end though, what's really wrong with The Golden Notebook is that all the notebooks are really all the same, just manifestations of Anna's inner thoughts, which are generally about herself and about men. Even when she's trying to write fiction, it's all about herself, and it's kind of a way to tell the same story in four different ways. Again, I think this is kind of cool in theory, and I can't fault the form which I think could have been really exciting, but honestly, it was just a little boring. As for it being a great feminist text, all I can really say is that we've come a long way, baby- The Golden Notebook-era feminism seems to be 'well, I'm all alone, so I can sleep with whatever men I want, even if they're married because I'm liberated... but I sure wish I had a husband to take care of me so I didn't have to think about stuff any more!' whereas, now, I feel like a husband is nice but not necessary, but also that a relationship between a man and a woman can be so much more equal. I mean, Anna's ex-husband doesn't appear at all in this book, and she doesn't even mention the fact that he never sees his child, which is something that is so frowned upon today, and also something which men would probably even take offence to- it's not a strange thing for men to care about and for their children, which they don't seem to do at all in this book. That's ok though, because this would probably make them not 'real men' something which Anna is very insistent about wanting, even if it leaves her in the subservient state that she is already in but can't see.

So, The Golden Notebook? I wouldn't bother. There are so many more books that are more relevant to feminism today, and without that to recommend it, I really just found The Golden Notebook too boring for words. If, however, a narcissistic (or arrogant, as one character in the book aptly describes it) stream of consciousness for 600 odd pages appeals to you, then go for it. Otherwise, just revel in the feminism of Jane Eyre or something, because honestly, I got a lot more out of that than out of The Golden Notebook.

Update: Frances's review is here- go read it because it's funny and pretty much sums up how little I liked this book in a much more concise way.
Posted by Laura at 17:00