I wasn't actually going to do an IMM/Mailbox Monday post for at least the whole of October (and, for the first time ever, I have October scheduled down to the very last post!) but this week was so good (or bad, depending on whether or not you live in my house) that I simply had to share all my new books with the whole world. So, without any ado, this week I got:

The God Delusion by Richard Dawkins- I've really been wanting to read this for a really long time just to, you know, see what the dude's got to say. I'm hoping it'll be more scientific and sensible, rather than just going 'everyone who has religious beliefs is a MORON!' not because that'll offend me personally, but because, you know, hate ain't cool. So we'll see if Dawkins impresses me or not.

Marlon Brando by Patricia Bosworth- I may have mentioned this once or twice (or probably more than that in my Godfather review alone, actually) but I love Marlon Brando quite an unhealthy amount, even old fat Marlon Brando (only, you know, in a really different way). This biography is quite short, but it looks pretty promising as an account of his life- plus I've never read a biography of Brando before, so it should be illuminating no matter what!

The Awakening by Kate Chopin- I don't know why I've heard of this, or where I've heard of it from, but until literally this week I thought it was a chick lit book for some unexplainable reason. Actually it's a nineteenth century and (I think) feministy classic before feminism was a thing. But I might have just made that up because I read the back and it mentioned women. And I can't even be bothered to look it up on Wikipedia to see if that's true or not, so let's just pretend that it is. Anyway, I bought that!

Crime and Punishment by Fyodor Dostoevsky- Don't tell anyone, but I actually already owned this book! BUT, in this charity shop they had an Oxford World Classics edition, which is much prettier than my original copy (which I think is an old Wordsworth classics edition and is also tres ugly) so I thought, if I have a pretty copy, I'm much more likely to want to read it! I'm not sure what I'm going to do with the old copy, possibly give it away to another charity shop, or maybe even as a giveaway (the Literary Giveaway Hop is less than a week away...) but we'll see. I'm keeping the pretty copy anyway!

Pudd'nhead Wilson by Mark Twain- I genuinely know nothing about this book, other than that it's by Mark Twain, has a pretty awesome title, and cost 35p (which I guess is, I don't know, about 50 cents?) I don't think I really need to give much more justification than that for buying it!

Beloved by Toni Morrison- I've read quite a few reviews of this recently, and I'm really interested in it, hence the buying of it! There were actually three or four Morrison books in the charity shop I got this from, but I thought I'd just see whether or not I actually like her before I start going all crazy and buying everything she's ever written (see: Rose Tremain- I own like four books by her, and haven't actually read a single one...) I have been looking in libraries for this for a while too, so I'm definitely excited to have it. 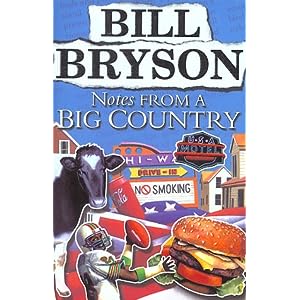 Notes From A Big Country by Bill Bryson- Bill is another one of those authors whose books I own but haven't actually got around to reading yet... Alley from What Red Read actually recommended this to me when I read Stephen Fry in America, and I'm definitely thinking that this might earn the prestigious title of the second ever Bryson book I've read (the first being Shakespeare, which almost doesn't count because I read it for the Shakespeare element rather than the Bryson factor). I've really got to read something by him soon though, because my unread collection is really getting ridiculous.

The Finkler Question by Howard Jacobson- And finally.... If you've made it this far in the post then you're a trooper and you should probably give yourself a prize- go and have some Diet Coke and a cake, and then come back. Are you feeling more refreshed now? Good. I've wanted to read The Finkler Question since I read this giant review of it in The New Yorker (you know when they give a book a giant review that it's worth reading) and I was really excited to get a literally brand new copy of it from yet another charity shop. So, yay!

I'm done now, I swear. Tell me, if you can, are any of these books worth reading? And are there any I should just dump back to charity shops? And aren't you pleased at all the money I've donated this week?! To all those people who are new here, greetings! If you like George Orwell, then boy have you come to the right place at the right time, because all this month I'm reading Orwell books (I call it Orwell October because I'm a genius) and then saying stuff about them. So far, I've reviewed Burmese Days, Down and Out in Paris and London, and A Clergyman's Daughter, and stay tuned for some more Orwell fun! And if you don't like Orwell, well (haha) I'll stop with the madness in November and go back to reading superwickedawesome books that are by other people! So stick around for a while if you please, and if not then, you know, have a nice week anyway!
Posted by Laura at 17:08