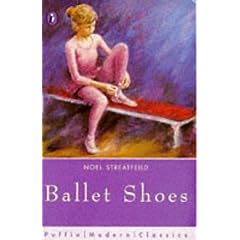 Ballet Shoes was one of my favourite books as a child, I think because, if I was spending time at my nan's house and was heartbreakingly without a book; there was basically only this, or Little Women, (in terms of good books with many words in) to choose from. About half the time I did choose Little Women, and that remains one of my favourite books, but the rest of the time, Ballet Shoes was always there to enchant me. Since my face hurts SO MUCH that I'm finding it difficult to concentrate on reading this week (Netflix, Stephen King, and childrens books only, please) I thought I'd revisit this charming little book to try and make myself feel better.

And, for what it's worth, it totally worked! It obviously wasn't quite as good as I remembered it being from my childhood (because, you know, what is?) but I was still sucked into the story and really felt close to the Fossils and their lives on the stage. I also think I identified many of the things that so appealed to me when I was younger, and, lets face it, still do now. What were these things? I'm so glad you asked, because I have a list all ready and prepared! So, here goes:

1. There's a role for everyone- And I don't mean on the stage. Each of the Fossil 'sisters' is completely different, most obviously in looks (you've got your blonde, dark haired, and redheaded girl) but also in everything else too- their ambitions differ, their attitudes are so diverse, and the things each of them ends up doing are so different. Right at the end of the book, Petrova says "I wonder which of us the other girls would choose to be", and yeah, it's a bit hit-you-over-the-head obvious, but at the same time, you've probably been thinking while you've been reading (if you're anything like 8 year old me) 'ooh, I wish I was...' In case you're interested, I probably wanted to be the blonde, beautiful actress Pauline when I was little, but now I'd probably rather be Petrova, because she's really the most interesting, at least in my opinion.

2. There are many celebrations- And when I say celebrations, what I'm really talking about is presents! I have always always loved it in books when it's Christmas and the characters all get presents, and I have no idea why- it's just something I love! And, there are ample opportunities for that in this book- I think a couple of Christmases are described in detail, as well as birthdays plus a few opportunities for present giving after the girls have performed in shows. I don't know why I get such pleasure out of characters in books getting imaginary presents, but I really really do!

3. The Money- This book is set in 1930s England, and there's a lot of opportunities to discuss pounds and shillings and whatnot, and I get such a kick out of that, possibly because it reminds me of a LOT of my childhood reading (Enid Blyton and all that). Because the girls all work in the theatre, they get paid, and then the money has to be allocated out; and reading about the way it is split somehow interests and excites me (maybe when I was younger because I liked maths a lot? I have no idea...). It also helped that they didn't really have much money to live on, and so had to take austerity measures and take very good care of their money, which for me was always something really interesting to read about.

4. The Stage- I used to want to be an actress when I was younger, so the concept of going to auditions, and wearing nice clothes to do so definitely appealed to me! I feel like a lot of this book is about the practicalities of children working in the theatre (having to obey child labour laws, for instance) and so I probably thought of it as a kind of guidebook on how to become a Child Star. Not that I ever did, of course. *SOB*

5. The Way They Live- The Fossils live in a big London house, and instead of having parents, they have a guardian, a Nanny, a cook, a maid, and a whole host of interesting and exciting lodgers. I lived with my mum, dad, and sister, so guess whose lives sounded way more exciting? The girls didn't even have to go to school-school, only stage school, and the rest they learned at home, including (which I find more impressive now) learning Shakespeare from actual Shakespeare scholars! To be honest, their lives sounded like the most exciting ones in the world.

Basically, I loved, and still love, most things about this book. If you read it while you were younger, you'll probably know what I'm talking about, but if you didn't, there's probably not much point in reading it now- I think of this as one of those books that captivate your imagination when you're young, and so you'll love it forever; whereas if you read it when you're older, all that magic just doesn't really appear. It's the reason I think I've seen so many negative reviews of Little Women floating around, because its charms are lost once you're past a certain age, but if you're below a certain age when you first read it, you will love it forever. I think we all have books like that, and I'm certainly glad that I do.
Posted by Laura at 11:39