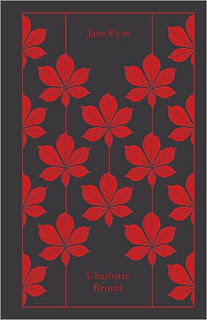 Note: This is going to be vaguely spoilerific if you don't know the basic plot of Jane Eyre. So you probably shouldn't read it. But you should definitely read Jane Eyre, because, hello, where have you been all your life?!

I've probably read Jane Eyre about 4 or 5 times now, and every time I read it, I think that it can't possibly be as good as I remember it being, and then promptly realising that, actually, it's a LOT better than that. Reading it, I'm constantly surprised at how clever and brilliant and utterly modern it seems- Jane is massively ahead of her time in terms of feminism, and generally being her own woman, always true to what she believes in and what she thinks is moral and right. I love Jane so much that I don't even mind all the religious stuff that, in this particular re-reading of Jane Eyre seemed to stand out so much more to me.

Because, yeah, it's totally centred around religion, which isn't that surprising considering that the Brontes were the daughters of a curate and all, but it surprised me how little I'd noticed it before. Because, thinking about it now, Jane starts off as being relatively non-religious in her thinking, in that she thinks that you should harm others if they harm you; then she meets Helen (I LOVE Helen so much, even if her part in the book is minimal- I think that her effect on Jane's character reaches far further than that) who teaches her to forget the wrongs done to her on earth because all wrongs will be put right in heaven. And so Jane takes this with her, and constantly pledges not to do wrong, going as far as to leave the man she loves because she can't live in sin and be happy for a limited amount of time, and be damned forever; and it is only after a time of penance for both of them that she's able to go back and they're both rewarded for her having done the right thing.

I think it's kind of difficult for modern audiences to grasp the whole Jane-leaving-Mr-Rochester thing (and by this I mean it was difficult for me, anyway) because she loves him so much and so enduringly, that all we want is for them to be together in whatever circumstances they need to be. Since we live in a time where divorces are easy to obtain and love rather than previous obligations (and definitely religion) is what seems to matter, it's kind of difficult to see how Jane could possibly leave Edward, considering the strength of her love for him. Taken in the context of religion, though, it's clear that Jane, because of what she believes, and who she is, can't possibly do anything that she considers immoral, even if it means having all the things she's dreamed of. It kind of looks like a cutting-off-your-nose-to-spite-your-face situation to us, but in a deeply religious society, and more importantly, a deeply religious character, it is the only possible thing she can do. It's not necessarily something that I agree with (I'd be his mistress quicker than you can say 'madwoman in the attic') but I think you've got to admire a girl with beliefs, and an author who gives you a nice big twist in the middle of a wedding!

But oh, I do love the love between Jane and Mr Rochester while it lasts. Because it's not just all like 'oh wow, you're so pretty and I'm handsome so this is perfect!' because Jane calls Mr Rochester ugly at least twenty times throughout the book, and he calls her plain, but their SOULS are perfectly matched and they respect each other and it is PERFECT only not in a horrible cliched way, but just in a wonderful and realistic, and then also beautifully written way. I love how Jane refuses to sink into sentiment with him, and doesn't let him call her an angel, or sweetheart or anything of the sort; ostensibly because she doesn't want to get too attached to him before they're married (which, considering the circumstances, is totally a good thing) but it's something that just massively appeals to me, in that they don't have to be all disgusting and sickly with each other because they both understand exactly what they're feeling, which is something that's much deeper than all the surface things. And then, there's also this:


"My future husband was becoming to me my whole world; and more than my whole world: almost my hope of heaven. He stood between me and every thought of religion, as an eclipse intervenes between man and the broad sun. I could not, in those days, see God for His creature, of whom I had made an idol."

Even I, in my infinite ignorance about Christianity, know that making false idols=very very bad news, from a God-ish point of view. So, even apart from not wanting to live as Mr Rochester's mistress, I think Jane has to leave him because she has forsaken God by worshipping a man, and so she has to get over this whole thing and get back to God (which I guess being near St John Rivers [who, by the way, I completely thought was like Saint John, rather than Singeon because I am sane and the English language isn't] did for her because of his boring and irritating religiousness) before she's allowed to have him. It's all very punishy and deprivationy, but at the same time it's following a theme through to the bitter end, and considering the end of the story isn't so bitter, who am I to complain?

So. There are kind of three sections to Jane Eyre, and the middle one is clearly my favourite because the love! and the mystery! and Mr Rochester dressing up as an old gypsy woman and nobody figuring out it was him! Literally, there are no better things. And the last section I always find kind of boring because I'm like 'for fucks sake, just get back to Mr R and marry him already' even though it's really nice and awww, look at these people who love Jane, I just can't be doing with it. But the first part, the bit where she's a sad lonely child, and then she goes to school where she's slightly less sad but much more hungry, that bit I find interesting- because we get to see the making of Jane, and also because I honestly love Helen so much! I mean, putting her religious outlook aside for a minute, her basic ethos is one that's so simple, and yet so perfect- put all the bad things that have been done to you behind you, because all that matters is that you are and do what is right according to what you believe. It's simple, and it's something that Jane takes with her and lives by in the rest of the novel, and it's the main reason why she's so admirable, and, yes, why I love her so much!

I've probably gone on about Jane Eyre for long enough now, only I haven't said nearly a fraction of the things I actually felt about it while I was reading it. Suffice to say, this won't be the last time I read it, and I suspect that next time, my focus will be on something other than the religious aspects of it (I'm just justifying that second Jane Eyre blog post next year here...) It's definitely one of my favourite ever books, and it's really just so perfect that it's the perfectest perfect thing that ever was perfect. Or something. Let's just say that, after this re-reading, I might have to admit that it's an even better novel than Wuthering Heights...
Posted by Laura at 17:28