Devouring Stephen King: The Dark Tower II The Drawing of the Three 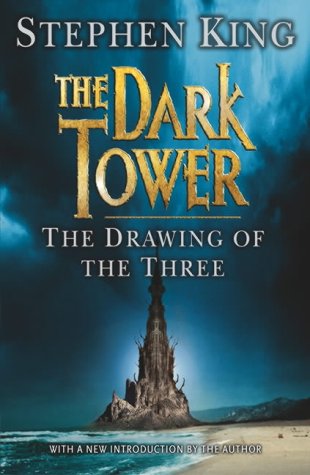 I'm having a difficult time figuring out how to review The Drawing of the Three, because how I feel about it is inextricably linked to how I feel about the entire Dark Tower series, and I haven't reviewed (most of) those yet. Just to give you an overview, I freaking LOVE The Dark Tower series, I think Roland is awesome, and I've been coming to realise more and more that what I love most about the series is the intermingling of worlds, and the convergence of characters from different worlds and times, who don't understand each other at all, and yet still make the best of things and try to live harmoniously together. It's because this is what I most like about them that The Gunslinger, and book 4, Wizard and Glass, are my least favourites of the series, because they're so completely fantasy based that I get a little bored.

The Drawing of the Three, on the other hand, is one of my favourite books in the series, and considering the series, that's saying a lot. There's basically nothing I don't like about it- King manages to create tension that lasts throughout, it's continually twisting and turning, and even though I'd read it before, I wasn't even sure what was going to happen! And that's not because I wasn't paying attention the first time, but just because there's so much happening at all times that you can't be sure where things will end up, and it's so early on in the series that you can't be sure who's important and who's expendable as a character. And even though I knew (knew!) the exact lifespan of each and every character in this book, I still found myself feeling a little bit terrified for Roland, and then Eddie, and, well, you catch my drift.

I feel like there's a limit to how much I can say, mostly because I don't want to ruin the story/entire series for you, but also because I shouldn't be allowed to gush! It's not healthy, nor, I'm sure, very interesting! So I'll just get it out of the way now that you should obviously, obviously read this series. I mean, it goes without saying, right? Roland is so incredibly strong and yet vulnerable, Eddie is my absolute favourite (more on him in a bit), and, well, Susannah? In this book, at least, she's very... interesting, but later on I know I love her too! And then there are all the other characters who I know that I haven't even met yet this time around, and really, I'm kind of impatient for them to appear! Damn, I love these books!

Anyway, so Eddie. I love him. Even though actually, in this book, he has the least to do with the ultimate story (after he's been 'drawn', the story draws really tightly together, and is really smart and intricate and has you going 'oooh!' at all the coincidence type-things) but at the same time, Roland, and by extension  the reader, spends the most time in Eddie's head and so I think we start feeling like we know him the best, and I definitely feel like I love him the best. And really, there's a lot about Eddie that isn't so loveable- he's a heroin addict with a nasty brother, and when we first meet him, he's smuggling 2 pounds of cocaine on a flight to New York. Nice. But, the more we learn about him, the more we're able to see how he operates, and most importantly, how much more open his heart is than Roland's. He's like the anti-Roland, which is such a good thing for the series because hey, sometimes you need a little less monomania. My favourite thing about Eddie is the way that, even though he's a heroin addict, the thing he most needs is to look after other people- he's not happy unless he can take care of someone, and he's presented with ample opportunities to do so, especially in this book. I just think it's really masterful, and also wonderful, how King can take a character who, at first doesn't seem to be massively likeable, but once his insides are explored, he becomes someone we (or at least I) can really love.

So, I've essentially revealed nothing about the story, other than that there's a guy called Eddie who I love. And that's probably ok- I feel like this is one of those things that you need to know nothing about before going into it, so that once you're reading it you can be constantly surprised and amazed and sometimes even heartbroken and you haven't really been expecting it. At least, that's how I read these books the first time around, and oh, how I loved them! I'll just say this: The Drawing of the Three is masterful in plot and character development, and it's an amazing second part of an amazing series. Sound good enough for you?
Posted by Laura at 08:27