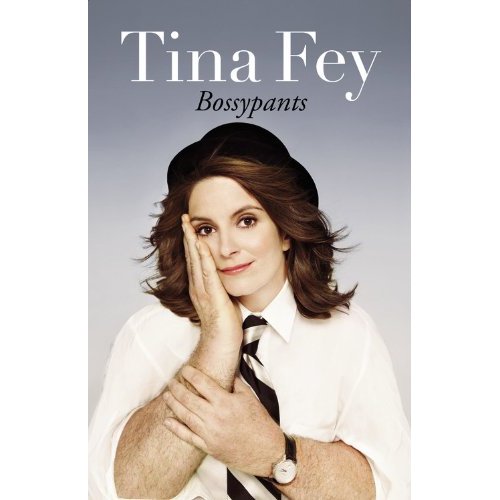 I read Bossypants in one day about a month ago, not because I wanted to or didn't have anything else to do that day (although, come to think of it, I really didn't) but because I literally couldn't stop reading. Because, guess what, guess what? Tina Fey is really funny! She's like ridiculously funny, and Bossypants could have been about 500 pages longer and I still would have tried to read it in that one day. I sort of feel like it's redundant to review it, since I'm thinking that everyone who wanted to read it has read it by now, and has obviously peed their pants with excitement about it because it's the best of all things. But just in case, I'll say some things about it.

Starting with, I bet you're wondering why it took me like a month to review it! (You're not? You really don't give a crap? Oh. Well. Shut up.) Anyway, the reason is that the whole time I was reading Bossypants I was going 'well, this is clearly amazing. But imagine it being read IN TINA FEY'S VOICE,' and, since we live in a digital age, I managed to download the Bossypants audiobook FOR NO MONEY. I should probably explain that, rather than depriving Tina of money (I feel close enough to her to call her Tina, are we all down with that?) I downloaded it with the blessing, nay the encouragement of Amazon, who are constantly sending out 'One free download with Audible' voucher-y things with everything I buy from them, and, well, I finally took them up on their offer (and promptly cancelled my Audible account. I'm a cold bitch).

So! This was my very first audiobook in adulthood and I didn't really know what to do with it- I mean, do you just listen to these things whenever, and just lay down and close your eyes and be read a story? I don't drive so that wasn't an option, and as for like going for a jog or something whilst listening to an audiobook... LOL. In a word. So, in the end, I listened to it just before bed, when I was too sleepy to resist listening to someone, but not quite sleepy enough to go to sleep. So, at a rate of about half an hour a night, not every night, I made it through my first audiobook. And it was bloody brilliant! A personal highlight was listening to the Tina Fey/Amy Poehler SNL sketch that was just in script form in the book, but was literally the performance in the audiobook; but there were a lot of other advantages to listening to Bossypants too. As in, Tina Fey is blooming hilarious (have I mentioned that yet?) and hence, her performance of her own book was also, obviously, hilarious.

And, as for the content? Amazing. Bossypants is ostensibly a memoir-esque thing, but included within it are a lot of Tina's thoughts about like feminism and what female beauty is supposed to mean and all kinds of things like that that make me go 'YEAH!' because, well feminism! And I learned some new things too- such as, did you know that Tina Fey has a scar on her face from being slashed by some horrible random when she was like 5? Because I had NEVER noticed it before, which I guess is the mark of good filming and stuff, but since I read Bossypants, I keep noticing it. Which is sort of irritating actually. And also irritating was the slight spoilering of 30 Rock (of which I've only seen the first season, but, then again, spoilers of sitcoms are not exactly like spoilers for drama series) and the complete absence of talking about Mean Girls! I mean... I guess it maybe wasn't that dramatic or amusing, but it is the very first thing that made me love Tina Fey, and I think it's mentioned, fleetingly, maybe twice in the whole book. Sadface.

BUT anyway- those minor irritations really only occurred to me after having read Bossypants, and after the audiobook, I didn't even care about them any more, because Tina Fey is just the funniest! (Duh. This is clearly my opinion of Tina Fey. Someone shut me up, yeah?) I mean, if you like Tina Fey, you're basically going to love this book, and if you don't? I don't know. This book will maybe change your mind, but it seems to me like it's very much in Tina's voice, and if you don't like that then, well, you're crazy, firstly, but also, you may not like this book. BUT how can you not like a book that celebrates women in comedy and makes men in comedy, by the way, sound really gross; whilst also talking about a father who sounds AWESOME (that's Don Fey.) and just other generally awesome things? You can't basically. So read it.

Oh yeah, and get the audiobook too. It rocks.
Posted by Laura at 15:29