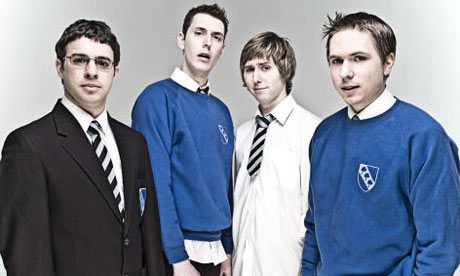 I love a good sitcom, and The Inbetweeners is, I have to say, a really good sitcom. With an opening sentence like that, it's obvious that I'm going to criticise it later, but be patient and calm down, because I'm not going to criticise the programme so much as the way people react and have reacted to it. The programme itself though? Pure funniness.

The basic premise of The Inbetweeners is that Will, up until now a privately educated kid, has been forced to go to a state school for sixth form because his mum now has no money (american translation: he's about 17, mum=mom. Actually, most of this post probably isn't going to make much sense to you, but just go with it, ok?) because his dad has left her. His dad is Giles from Buffy, but we don't know that until the completely inferior movie, so just forget I said anything, ok? ANYWAY, so Will goes to this new school, and manages to make friends with three of the weirdest teenage boys maybe ever portrayed anywhere, ever. There's Simon, who is a bit of a hunk but also the oddest of the three (he can't really talk to girls and just gets in these situtations...), Jay, a sex obsessed virgin; and Neil, nice but dim. They're all utter twats, but when utter twats are hilarious, how can you help but watch them?! One of the bigger spiritual questions there, I'd have to say.

I watched most of all three series over a few days last week with my dad (note: there are few worse things to watch with your parents than The Inbetweeners. But, since they find it funny too, whatcha gonna do?) and a few things occurred to me that I hadn't really thought about before. Namely: it's ok that the main characters are twats, because it means they can do extremely embarrassing things, and instead of feeling bad for them, you just find it really really funny. And also: they always get their just desserts- if they do something especially twattish, there's always a hilarious punishment in hand, like destroying Simon's crap car, or having to hide from the angry man whose flower beds they've destroyed. And while they may rely a little bit too much on visible sick (I really really don't find projectile vomiting funny) or making poo jokes, on the whole, it's just a whole lot of fun.

I think it would be really easy to call The Inbetweeners sexist and evil, because of the myriad times girls are referred to as 'minge' or 'poontang' or 'clunge' and I'm not going to lie, it does sort of bother me. But getting up in arms about it would be ridiculous, because it entirely misses the point. Jay (who is the worst offender with the vagina talk) is the most hapless with girls, and because he is physically unable to be cool in front of girls, talking about sex and his 'sexual exploits' (all fictional) is the best he can do. It's like the thing that you read in teen magazines where girls say 'I'm the only one of my friends who hasn't had sex' and the agony aunt is like 'you don't actually know that, and also, the ones who talk about it the most are usually the least experienced' and, well, that's definitely the case in The Inbetweeners!

But here's the thing with missing the point. For every person watching The Inbetweeners and going 'shit, I hope I don't act like that and that I'm cooler than them' there's another person going 'haha, look at that clunge over there!' Failing to see that the characters are basically the least cool people in the world, they adopt their catchphrases and then actually refer to girls as 'clunge'. Unironically. Just because they saw it on the telly and they thought it was funny. This is something I like to call The South Park Effect (I just thought that up as a thing to put all in capitals, and I really don't think that's what I want to call it... but again, just go with it, ok?) Because, you see, I really like South Park and I think it's really clever and satire-y and that one episode where they killed Chef and called him a massive hypocrite was so amazing. But, for every me, there's someone watching it who just goes 'haha, they just said fuck!' Or, 'LOL, that kid shit himself!'

So, what I'm saying is, people are morons.

But! That doesn't mean the rest of us can't watch things that are funny and laugh at their funniness, while also knowing better than to adopt their lifestyle (lifestyle? Catchphrases, I guess!) for our own. The Inbetweeners remains hilarious, and gross, and embarrassing, and rarely, although importantly, far deeper than it has to be. I've done some extensive research into it and, apparently, MTV are making an American version of The Inbetweeners. About this I say: 1. An American version is really really needed, because while I find The Inbetweeners hilarious, I know that there's so much that just wouldn't translate at all. And, 2. It's really going to suck. I'm sorry, but I can already see that it'll just be really mistranslated and just terrible. But, I will give it a watch, if and when it comes to fruition. Even if I end up laughing at it for all the wrong reasons...
Posted by Laura at 11:19