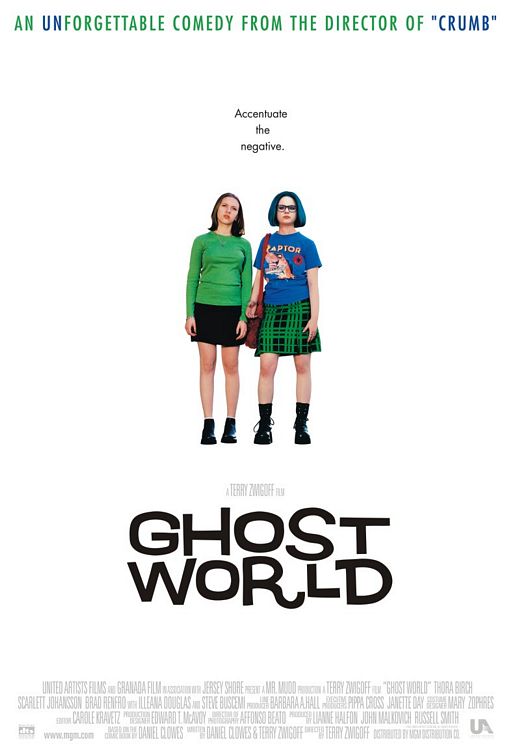 I watched Ghost World for the second time this weekend, for no good reason because I didn't really like it the first time round, so let's just say it was the fever, ok? The thing is though, this time around I really liked it, and that seems to have been the case with quite a few films I've seen lately- I have to watch them more than once to get a better appreciation for them. Must be my age.

But with Ghost World, I think I know exactly what it was. See, I get these things called 'expectations' with films (I think a LOT more than I do with books) and when they're not met in their entirety I get a bit pissed off, plus I'm not really focusing on what's actually happening. It's kind of a huge problem, I'll admit, and I guess it should be enough of a reason for me to always be willing to watch a film more than once, since, once I've got the fact that it's a massive disappointment out of the way, I can see what it actually is, and appreciate it in itself.

And that's what happened with Ghost World, I think. Cause I had certain ideas about its quirkiness and overall applicability to my LIFE that I really didn't find in it the first time I saw it, but this time around, I just sat back and allowed myself to appreciate the story and stuff. And it's kind of awesome- Enid and Becky are sort of awesome/horrid outsider teenagers (of the kind that, you know, LOVE being outsiders) who have just graduated high school and, whilst Becky wants them to get on with their lives and live together, Enid's sort of stuck and doesn't really know what the hell she's doing. So, she tortures and then befriends Steve Buscemi because that's the only sane thing to do!

So the first time around I was really really put off by Enid, because yeah, she's kind of a lost soul, but ALSO she's kind of mean. Like, meaner than I could apparently cope with, and so I was sort of put off of her a bit (even though she's Thora Birch! Damn I love Thora) and, really, just wanted her to stop being stupid and doing stupid things. This time around though... I was a lot more sympathetic to her woes and her general lack of knowing what she wants to DO in the world, cause, well, I can relate. And it's like, this time, I could accept that I didn't have to be exactly the same as her to be able to relate to her character and some of her struggles and to be able to get something out of them (mainly, like, if there's nothing you want to do where you are, go somewhere else, which I think is a good thing to remember!)

The thing about Enid, though, is that her actions don't just affect her, they have a negative impact on the people around her; and it's like she's too self-absorbed to see that. So, whilst I really did have more empathy with her on this viewing, I still find her a frustrating character- she leaves Becky completely exasperated, and she's not so nice to Steve Buscemi, or her poor old dad. So, she's not exactly entirely likeable, but she's definitely intriguing, and the kind of character that you could spend years thinking about and analysing and never really get to the bottom of, because, I think, she doesn't even know who she is herself. And really, why should she? She's only 18, you know?

So, you could spend years analysing her, or just do it in a blog post. I choose to do the latter. This isn't even so much a review of Ghost World, as an encouragement to give things a second chance sometimes- maybe you weren't ready for them the first time round, or maybe your own brain was impacting on your enjoyment of it. Either way, a re-viewing of a film you didn't necessarily like the first time round, can be filled with unexpected wonders and depths. Or maybe I was just delirious, and I still don't like the film. Who can say?!
Posted by Laura at 11:50