Devouring Books: Why Be Happy When You Could Be Normal by Jeanette Winterson 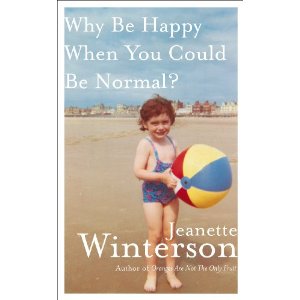 I have a bit of a fraught relationship with Jeanette Winterson, in that I really like Oranges are Not the Only Fruit, but I can't get into basically anything else she's ever written. I also find that some of the things she says shake my world and bring me to such realisations, whereas others make me go 'yeah... who doesn't know that?!' So in one way it's kind of weird that basically the first full price book I've bought in forever was this, Winterson's memoir, but since Oranges is part memoir and that's the one I like/love (I love parts of it, at least) it sort of makes sense too.

Why Be Happy When You Could Be Normal, is, of course, not a straightforward narrative about Winterson's life, because that's not really how she writes; but it is one of the best memoirs I've read in a long time that isn't, you know, hilarious (cause, obviously, Bossypants wins the best memoir of EVER award). And hilarious it is not: if you've read Oranges, you'll know that Winterson didn't have the best upbringing, but you won't know about the time she went mad and tried to kill herself, or the lingering inability to love that her upbringing inflicted on her. Her's is not the easiest story to read, and I doubt it's the easiest to tell, but she does it well and without much self pity- it's a lot more 'this is how things were and I'm still scarred by it but I'm trying to move on' than 'poor poor me- please pity me so I can feel better.' Because, you know, that would have been an unreadable book.

What I wasn't expecting from this book was a detailed discussion of what it's like to be adopted, but it's something that takes up a great deal of Winterson's thoughts and analyses of things. Winterson's general style, I find, is to tell something that happens, and then analyse it for a lot longer than the first thing took to tell. And, in her memoir, a lot of this analysis, especially of her 'going mad' hinges on the fact of her having been adopted, and having that first attachment that she ever made ripped away from her. Her difficulty in accepting this, as well as her eventual reconciliation with her birth mother (can you have spoilers with non fiction books? If you can then WHOOPS!) combine to make an interesting and compelling account of what it's like to have been adopted. And that's compelling just to me, a non-adopted person- to someone who's been adopted, it could well be something life changing, something that could make them think a lot more about their pasts and their futures.

But then again, most people were not adopted by Mrs Winterson.

I think the best thing about Why Be Happy (which sounds like the most miserable title ever now, but how else to shorten it?!) is that, as well as talking about bad things that happened to her, she also talks about the things that saved her, which just happen to be books. It's not that surprising that an author loves books, but it's still pleasing to know that when her mother constantly failed her, and she hated school and the way she lived and everything, there were always books to turn to, books that she had to hide from her mother (seriously, her mum was crazy) but which sustained and saved her. And then she went to Oxford and became an author and lived happily ever after (well, not really. But she does discuss how grateful she is that her life turned out as it did).

I'm not going to pretend that I now believe that Winterson is a perfect goddess or that this memoir is entirely perfect. There are still points where she makes really obvious assertions (like, at one point, saying that all time is not the same, which is just like DUH, I literally spent all evening reading your book and it felt like about 5 minutes) and sometimes she's self-referential, which generally bugs me, but also there's a whole chapter where she tries to justify voting for Thatcher, and I'm just not sure that I can forgive her for that. Except I think that maybe I can, because she says this:


"I did not realise that when money becomes the core value, then education drives towards utility or that the life of the mind will not be counted as good unless it produces measurable results. That public services will no longer be important. That an alternative life to getting and spending will become very difficult as cheap housing disappears. That when communities are destroyed, only misery and intolerance are left."

So, yeah, overall, this book was sort of amazing. It hasn't exactly put me into the Winterson-as-an-author ultimate fan club, but it has put me into the Winterson-as-a-person fan club. It was well worth the full price I paid for it, and yeah, basically just read it if you want to feel feelings for another human being that you don't actually know. Just skip over the voting for Thatcher stuff.
Posted by Laura at 10:26