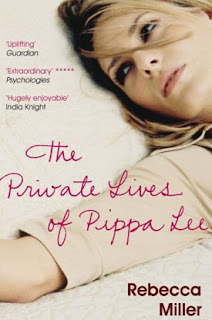 "She's a mystery, a cipher, something nearly extinct these days: a person not controlled by ambition or greed or a crass need for attention, but by a desire to experience life completely and to make life a little easier for the people around her."

Hey, so, you know last week when I did the readathon thing and kind of read too much and so now have slightly got the plots of The Private Lives of Pippa Lee and A Visit from the Goon Squad intertwined in my head? Yeah, let's pretend that's not a thing and proceed as if this review is going to make sense, and just, you know, excuse me if I maybe skim over the plot a little bit so I don't get it completely wrong...

So. Let's talk about Rebecca Miller a bit first please? Cause, like, I'd never refer to a woman in relation to the men in her family because that would be dreadful and sexist, but while we're on the topic, can I just bring up the fact that her father was Arthur Miller, and her husband is Daniel Day-Lewis? This is relevant, because firstly, we must discuss if she's gotten good writing genes from her father (I say yes) and secondly, the first mention of her I ever heard was in relation to this film, The Ballad of Jack and Rose, which stars DDL, and was sort of creepy and slightly father-daughter incesty. Also Earl from My Name is Earl was in it, and Frances and I debated whether he's more attractive with or without the 'tache (I say with, but I really really love Earl!). And then we had to stay up until like 3am because My Beautiful Laundrette was on. Yeah, it was fun.

But anyway. I think I liked that film, ostensibly because of DDL, and I wasn't disinterested in experiencing more of Miller's work. When The Private Lives of Pippa Lee (the movie) came out, I was intrigued by, I think the title more than anything else, and I must have seen the book somewhere and bought it (obviously). And then not read it (even more obviously). The thing with the story is, I thought, for some reason, that there was going to be a United States of Tara split-personality thing going on (Private Lives, you know?) but instead, it was pretty much a really really interesting character study/things have not always been this way narrative going on.

Allow me to elaborate. So, Pippa Lee is this amazing wife and mother, and even though her daughter harbours some resentments towards her (this novel is filled with complex mother-daughter relationships), basically everyone thinks she's amazing and the best wife ever. As, indeed, does the reader. She's just moved to this retirement village place with her husband (he's 80 and she's 50) and she's not quite at home there, being basically the youngest resident, and still with so much more life left in her. Since they've moved in, she keeps having weird sleepwalking epsiodes, and really can't figure out why, and so the novel delves into her past to try and figure out her issues, but really just to tell the story of how she got where she is today.

And OH, what a story! It was really quite unexpected, but just so good (by good I mean well written and all, rather than that she was good... She was not good!) and in perfect contrast with the persona that the book first introduces. Seriously- I don't want to give too much away about it, because I think it really is best if you find yourself kind of shocked by Pippa's actions, but honestly, it's so amazing. One thing I found interesting was that the first section is in the third person, whereas the second is in the first. I feel like this is some kind of allusion to the fact that Pippa as she is in the present is not the real thing, and she's just playing at being this person, whereas her actions in the past, whilst not necessarily the best choices, were truer to who she was, and what she wanted. Although maybe she's never known what she really wanted, which is another avenue that the book explores.

And the end! Obviously if I'm not going to tell you about anything past the first section, I'm not going to tell you about the end, but it just felt literally perfect- perfect for the character, and perfect for the what the reader wants for Pippa. Basically, I was absorbed by Pippa as a character, which is definitely a good thing because the entire book rests upon her- if she'd have been unsympathetic it would have been terrible, but although she has her flaws (what great character doesn't?) she's someone that you unreservedly root for, constantly. Here's a thing that I didn't realise was a compliment until I read this book, but about halfway through I actually forgot that it was fiction- I was trying to figure out where in New York she had been, and who else might have been there at that time and so on, and then I suddenly had a little 'oh! These things didn't actually happen!' moment, which has happened to me so rarely that I didn't really know what to think about it! But I've since decided that it's a good thing- nothing was overdone with the language or the details, so I could believe in it all, and agree with it wholeheartedly. That's a good thing, right?

So this has been way too long, but what can I say? I liked! I'm definitely going to check out the film soon and see if it measures up, but since it was written and directed by Miller too, I'm going to assume it does!

I read this book as part of the Fuck the Patriarchy Readathon. If you'd like to donate to Rape Crisis, please visit this Justgiving page. Thanks!
Posted by Laura at 12:24