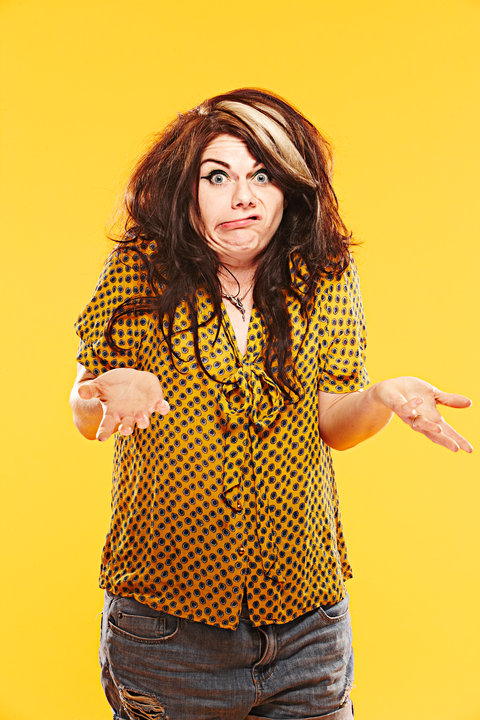 Caitlin Moran being awesome. For more pictures, see here.
Sunday greetings lovely ones! Note my exclamation point and hearty manner, which is surely the result of having sat in the garden for a full, ooh, half an hour yesterday, and also of mum having felt much better this week, which maketh my heart glad. Having said that, I am writing this on Saturday afternoon, so I'm probably the grumpiest bitch ever today. Oh well, let's just pretend I'm not.

Let's see, the week... It went SO slowly. I think I need to do more outside things (easier said than done to find the motivation for that when it's raining all. The. Freaking. Time) to make the week go faster, because I swear on Wednesday it felt like Friday, so now we're just on like the NINTH day of the week, which really shouldn't be allowed. At least Friday, when it did actually come, ended up being really fun, cause me and my cousin went out to dinner, which we NEVER do (we see each other at least once a week, but dinner? Basically never) and then couldn't be bothered to go home so we drove around for a bit and ended up at our nan's house having hot chocolate (well, Horlicks, which I then decided I didn't like...). I know, you're so jealous of my wild, party animal life, but it was really really fun! I like fun!

Just the one hospital visit this week too, for my dad for a change (*siiiiigh*) but this week coming, as long as her white blood cells are being good, mum should be having her last lot of chemo! *does a happy dance, gets some booze/cupcakes ready* Which is obviously a very very big good thing and I'm hoping that it'll take a bit of a load off of these poor old shoulders of mine (mentally, I obviously mean- not complaining about doing houseworky things). And then we can watch the Olympic opening ceremony that evening. Yay? I don't know. I'm trying to muster up some kind of enthusiasm for the Olympics, but the best I can do is 'I like... the gymnastics?' But mostly I'm just like 'you spent HOW MUCH on this?!' and I can't really get over that, so... Yeah.

In other news, can we talk about books for a minute? I mean, another minute, extra to the many many minutes we've spent doing that already! Cause I feel like I've got a little bit of reading mojo back this week, possibly just because I've finished Vanity Fair (which is AMAZING by the way, and which I'm trying to muster up enough words than mean good to write a review of, but I feel like it was slightly holding me back, reading-wise? I dunno), but maybe just because I really feel like reading a lot at the moment! And so, a big cheer for reading mojo, but that's not even what I wanted to talk about. *Attempts to re-establish the subject, lays down and dies a little*

SO! One of the things I'm reading at the moment is Needful Things by Stephen King, and on the back there's a quote about him that I don't think I've ever read before, and it goes thusly: "An incredibly gifted writer, whose writing... is so fluid that you often forget that you're reading." (Guardian). And I'm  like really impressed by this (some might say overly impressed...) because firstly I think it's a really nice thing to say about someone's writing, and secondly, I enjoy the fact that, out of all the things that have been written about Stephen King, someone thought this was worthy to go on the back cover of one of his books. And I agree with them! Because I think it's the kind of thing you look for books that you love to have- to sort of go beyond looking at words and taking them in, and beyond that thing where you basically have a movie going in your head, to where it just is- this is what's happening, and it's happening to you (well, hopefully if you're reading Stephen King it's not literally happening to you, but you know... metaphorically).

Which obviously isn't to say that books that maybe are a bit more of a struggle to read aren't worth it, or that this same effect can't be achieved with books that are harder to read (I definitely found Vanity Fair pretty challenging, but still forgot I was reading at quite a few points), but just that I think that to really love a book, for me, I kind of have to forget that what I've been doing with that book is reading it. This is starting to make no sense, so I'm just going to have to leave it! But let's just say I like that thing that that person said, ok?

And that's about all I have for you folks! Tonight (Saturday) I think I'm going to watch either one or two Nora Ephron films (Noraaaaaa! :( ) (Sleepless in Seattle and/or You've Got Mail, thanks for asking) because they are from LoveFilm and I should probably watch them, and also because I've never seen them (ok, I might have seen a bit of You've Got Mail, but definitely not Sleepless in Seattle) even though their descriptions make them kind of sound the same, so maybe if I watch 2 Ephrons I'll watch Julie and Julia instead of one of those... but what am I telling you for, I will have done it by the time I post this! (DUH!) But anyway you can possibly expect an Ephron movie review this coming week, along with a review of a collection of Alice Walker short stories and hopefully Vanity Fair, assuming I can get my arse into gear. And as well as enjoying such wondrous things, I hope you also have magical weeks!

And in this lovely old spirit... This weeks new-favourite-blog is actually an old favourite: Your Move, Dickens, but Darlyn took a bit of a break from blogging recently so I figure, this counts! So anyway, on her blog she's reading through some classics and saying things about them (like a blogger does) and she's usually very amusing/heartfelt/inspiring, and always always honest and forthcoming. And I really really like her writing voice. So, go! Read her blog! Tell her she's awesome! You'll be glad you did!
Posted by Laura at 10:09