My Steinbeckian Feelings, Laid Out For You In A Blog Post

Ah, Steinbeck. I'm not sure that I've ever fully expressed my love for Steinbeck here, other than maybe in Top Ten Tuesday posts, and in every single mention I've ever made of this readalong, but I love the dude SO HARD.

Because the thing is, he can be SO funny, and then also really sad, and just kind of, you know, covers the entire range of human emotion, whilst also stringing together amazing sentences AND creating characters that have the perfect mix of good and evil, or that are, in other words, just like real people. I've read a LOT of his books, and I haven't read one that I didn't like- even his book about war was excellent; his Journal of a Novel really gave an insight into how the creative process, or at least his creative process, works; and I can tell you, having read a thousand pages of his letters, that I can't think of anyone I'd rather have received a letter from. Plus, you know, he was kind of dishy 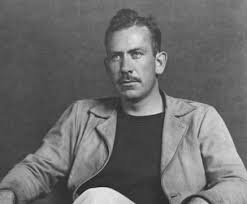 Although it's possible I just think that because I like his books so much. You tell me! (Repeat above gif) Possibly above all things, I love his politics. I believe that he's the leftest leftie that I can think of (ok, maybe not that I can think of. But he's pretty left wing-ish) and hopefully these are your politics too, because there's going to be a bit of that in The Grapes of Wrath (and also because otherwise I probably can't talk to you anymore. Sorry). But his politics are really motivated by the way he feels about people, and how unjust the world is, and how he just wants everything to be better and OMG Steinbeck just hold me! And so he is the loveliest lovely.

The End. Except to say, hey, link up your posts below please! And then we can all visit and get our Steinbeck feels out in the open. And I can defend him to anyone who dares besmirch his name!