This week really has been so odd. It's kind of felt about 3 times longer than usual, I'm not sure I had any idea what day it was at any point, and things have been happening. Like I got a job! YESSSS!

I mean, it's only part time, which isn't ideal, BUT you got to accentuate the positive man! So that's a thing that's awesome, but also SO strange, and it came on the back of two rejections in a week (less than a week, actually. It wasn't fun. And one was a LIBRARY. I mean, come on!) which added to the things I had to do, and then kind of stress about. Whilst also trying to ignore the stressing about them.

Basically, even though the interviews I had this week only took up about two hours of it, they actually took up all the time from the interviews to the phone calls of DOOM, which meant that it felt like they took up a lot of time, and I was astonished that I still had time to walk (A LOT), cook things and generally function in a life way, because it felt like job things had taken up so much time. Even though they hadn't. There's probably a lesson here about the elasticity of time or something, but whatever, this week just felt waay long.

But then it was all good and I was happy and ALSO I had pizza! With my cousin. Which always makes for the best kind of Friday evening.

So that was a really vague description of my week, I realise, but the thing is, at the time it felt totally stressful and long and like UCK, but now that all the preparing and interviewing and waiting to hear back is over, it's sort of a blurry memory of something that was horrible but is now over. Like that thing with childbirth where you forget it as soon as it happens. NOT that I'd ever compare my week to childbirth... (speaking of which, BEX HAD HER BABY! Go and see!)

And now, for the book news.

Guys, I bought too many books this week. Without even really realising. This is BAD and shouldn't ever be encouraged. But... Do you want to hear about them all? I mean, there are 10 of them. Which is really bad. I should probably be punished. Can you tell how sorry I am? (I'm really not) So I got Wolf Hall because Hilary Mantel just won her second Booker Prize, which isn't necessarily something that I'm massively bothered by (I mean, Doris Lessing won the Nobel Prize for Literature and I think we all know how I feel about HER) but it kind of makes me think there might be something in it. I realise that I've been putting her off because she writes Historical Fiction, which is something else I'm not exactly fond of, so... This might sit around for a while. And then I also got Possession, because someone, I believe it was Alice, said it was really good (a theme for this week!) so... We shall see.

In this same escapade I also got The Handmaid's Tale which of COURSE I already owned, but my copy really did have falling out pages and it IS one of my favourite books, so I feel really justified having a nice copy of it. *Looks around for anyone protesting this* *Also remembers why she doesn't do posts like this anymore, gets a formatting HEADACHE*

Anyway... I tried on Friday to go to this book sale that I tried and failed to go to before but it was cancelled (it's very possible I moaned about this at the time) and I failed AGAIN on Friday because I was there at about 11am and it didn't start until 1.30pm, which I was NOT in the mood for hanging around for (there's very little to do in this town, I should add). So, I vowed to return the next day (which I did!) but before that, there was time for a little charity shopping, and

My next Murakami! I didn't have anything with me to read, so I started it while I waited for a train, and,  a mere 22 pages in, there's totally a vagina metaphor. Nice work, Murakami.

And then there was this book sale! In a church! So I consider all books bought as a donation to Jesus. I bought 5 in total, and here are 4 of them:

I didn't even know that Man Walks Into A Room existed, since I thought that The History of Love and Great House were Krauss's only books, so I'm pretty excited about that! The Silence of the Lambs is the other book that's Alice's fault, because she was going on about it this week, and I saw it, and, well, one thing led to another. The Brontes obviously had to be bought because of my Haworth devotion (I've written a whole post about it that'll be going up this week, by the way- exciting times!) and then I got  The Collector because I believe Brenna said nice things about it ages ago, so I thought it was worth a try.

But none of that is as exciting as what else I have to show you! (Isn't this post getting LONG?! Sorry!) So firstly, and slightly less excitingly, the other book I got at the church sale is a signed edition of Checkmate by Malorie Blackman, which I wouldn't normally have bought, but just LOOK at what it says inside: 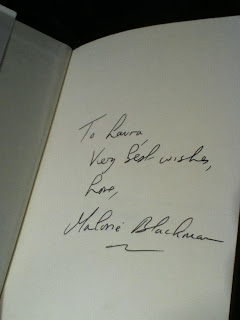 I mean, I couldn't exactly NOT buy the book that was dedicated to me now, could I? I have to add that I basically read everything Malorie Blackman ever wrote when I was about 10, so... This isn't just some random author! I LOVE HER.

And speaking of love... My sister met Jacqueline Wilson on Friday and I was immensely jealous because she was ACTUALLY my favourite author when I was a child/tween and WHY DON'T I GET TO MEET HER? But I was mainly pacified by THIS: 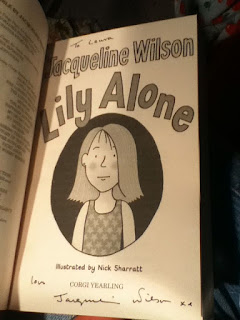 Which I will cherish FOREVER because omg Jacqueline Wilson! I should add that I've now, in the space of a month, gone from having 0 signed books to having 3, which I think is pretty impressive! But then, I am easily impressed...

I won't detain you any longer because WOAH that was long, but a quick look at the week ahead: Work! Agh! It's going to be interesting figuring out how to get things done, because I'm normally not much good in the mornings but ok in the afternoons, which is fine for work (which is in the afternoons) but means that I'm going to have to get my act together in the am if I want to get anything done at all. Which I do! But I'm sure I'll figure it out. And either way, y'all will hear about it next week anyway!
Posted by Laura at 09:12