Devouring Books: Quiet: The Power of Introverts in a World That Can't Stop Talking by Susan Cain 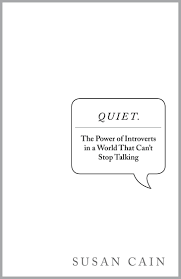 "How did we go from Character to Personality without realising that we had sacrificed something meaningful along the way?"

I've been struggling to write about Quiet because it's a book that at the time I was a bit reticent to pick up at any point (I'm so not into non-fiction at the moment) but now that I've finished it I kind of can't stop thinking about it? And actually, it's not even that I can't stop thinking about it, so much as that something will come up and I'll be like 'oh man, I was just SUCH a classic introvert right there', and it's just made me really aware of a lot of my behaviour that I probably wouldn't have noticed before. Only, you know, in a less annoying way than that sounds.

So, Quiet. Basically it's a book about how awesome quiet people are, and how undervalued they are by society Western Societies, and actually parts of it read as an instruction manual: for teachers, on how to nurture introverted children, and for businesses, on why to hire introverts. It takes a look at the history of how introverts came to be so undervalued by, well, everyone, and then systematically looks at why that was wrong, and all the advantages there are to being an introvert in all aspects on ones life, and how it wouldn't hurt extroverts to look at the behaviour of introverts sometimes, and apply them to their own lives.

I can't even tell you how much I needed to read this book. I'm actually really secure with myself to what I think is sometimes an annoying degree, and I think a lot of that has to do with being an introvert- my brain is really good company for myself, and I always feel sad that there are people who must not like being alone inside their own heads, so seek out others to be around them all. The. Time. (I'm not saying this is true of ALL extroverts, but, you know, some of them.) But in spite of this, I've always felt that, when it's time to venture out of my bedroom and interact with other people that it's 'wrong' to be so quiet. To not always know what to say. To be bad at starting off conversations but ok at participating in them. To have more friends on the internet than I do in real life.

But no more! This book, honestly, feels like it could be a bit of a life-changer, even if it didn't feel that way at the beginning. Not in any major ways, but just knowing that hey, it's ok to be quiet, and it's ok to think that, when it comes to speaking, quality>quantity. Basically that, it's ok to be quiet because the world needs listeners just as much as it needs talkers, and right now, maybe it does even more so. There were a few things I was especially fascinated by, and I'm just going to bullet point them up right now:


If you've been thinking that this book is anti-extrovert, then you would be wrong (and also kind of a douche. Like someone going to the NAACP and going 'you're so ANTI-WHITE!' You're missing THE POINT). But anyway. At many points, Cain talks about how good it is to have balance between introverts and extroverts, and I have to agree- I love extroverts, especially the ones that are good at getting other people to talk, and I find them way easier to talk to. The point isn't to say that extroverts are terrible people, but just to show how poorly valued introverts are, why this is the case, and then to prove that introverts DO have attributes that are worthy of attention and that wouldn't hurt EVERYONE to consider taking on, just like everyone NOW is expected to act like an extrovert. It's not a book about hating anyone, it's a book about appreciating everyone. And I love it.

I really think this is a book that anyone, introvert or not, can appreciate, and in fact, I think it's almost more important for extroverts to read to really get a better understanding of how introverts operate and why. I really think that it's the kind of book that tilts your view of the world juuust enough to have a new appreciation for all different kinds of people, rather than just the ones that society celebrates and puts on pedestals. There are times when we could all do with being a little quieter, and this book shows us why that's ok. Why, in fact, it's awesome. And I love it for that.
Posted by Laura at 08:00