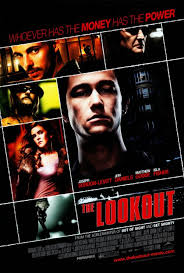 I'm not sure I've ever been as surprised by a film as I was by The Lookout. It's not that I wasn't expecting it to be good because, with JGL as the leading man I never expect anything but perfection

But just from looking at the movie poster, and reading the description of it on Netflix, it sounded very much like a straightforward action movie with not all that much going for it except, obviously, for JGL. (Does my JGL-worship bore anyone? I mean... I don't really care if it does, but I am interested!) But anyway, I couldn't have been more wrong, and for that I am grateful.

I watched The Lookout on the night I learnt what stomach lining tastes like (sorry...), just before all the vomiting, so the fact that I still think it's an awesome film is a testament to... What an awesome film it is. If it had been any less than what it is, I would feel faintly queasy at the thought of it (negative associations and all) but actually I pretty much feel like I want to watch it AGAIN because it's kind of complex and brilliant and I love it?

So. JGL plays this guy who is the ice hockey STAR of his high school (is ice hockey even big in Kansas? I have no idea) who one night drives like a moron and ends up with short term memory problems. We next see him 4 years later, when he's trying to figure out how to live his life when he can hardly remember the most basic of things (where the can opener is, for example) and trying to reconcile the way he lives now with the way he used to be. It's honestly heartbreaking (possibly mainly because I love JGL... But only because he MAKES me love him, with all the acting he does), and I was kind of like... This is the weirdest start to an action film...

And it kind of kept not being an action film! I mean, there are some guns, and there's some plotting, and it's pretty dramatic, but if it is an action film, then it's a really really character-based one and it didn't make me roll my eyes or sigh even ONCE. It's more like... Here's this guy whose life has very very much not turned out like he wanted it to, and someone (a VERY manipulative someone) offers him a chance to, if not go back to the way things were, at least to make things better for himself now, if by better you mean being part of a bank heist and stealing money so you can buy stuff. Too bad there's no cure for memory damage.

And it's really really sad to go through the various stages of this dilemma with JGL, and some EVEN sadder things happen (there's a particular sad thing that happens that I don't think is dealt with seriously enough, because it happens in the middle of an actiony bit. Aaaaaand there's basically my entire problem with action movies.) but mostly it's a film about learning to accept the lot in life you've been given and do the best with it that you can. Oh, and not to rob banks. That's an important message too.

So. In a nutshell, I really liked this film, as I almost always like films that involve JGL. Unlike SOME of his films though (say, for example, 50/50) The Lookout didn't SCAR me so that I can never watch it again- in fact, I kind of want to watch it again, like, right now. The mark of a good film, or evidence of an overwhelming JGL obsession? We may never know...
Posted by Laura at 08:00