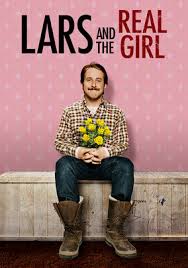 Lars and the Real Girl is the perfect example of a film I'm so glad I watched alone than with other people. With others, I think it could have been the kind of thing where I could have either been swept along into thinking that it was ridiculous without really considering what the movie was trying to say, OR I would have been the only person in the room crying at it. Either way wouldn't have been my perfect way to watch a movie, so I'm lucky I watched it all alone in my bed late one night.

Now let me tell you the plot of Lars and the Real Girl and you'll understand why I fear (yet also, you know, get) people would laugh at it. Lars (Ryan Gosling) is a socially awkward guy who lives in his brother and sister-in-law's garage. One day, a package arrives for Lars, and inside is his new girlfriend, an anatomically correct sex doll who Lars acts like is a real person. For the whole movie. That's it, that's the film. And I know, it sounds bonkers, and yes, I definitely used that word in a text to Frances when I was watching it.

But. Even though the premise is bonkers, and even though when you're watching Ryan Gosling (beautiful, beautiful Gosling) act as though a rubber doll is a real person it's difficult to take seriously, somehow this film managed to be both heartwarming AND thought provoking. Can you believe it was both of those overused words at once? Because it was! But seriously- whilst it's so tempting for you as the viewer to make fun of Lars initially, when you see how the people in his small town react towards him and his 'girlfriend', Bianca, it's almost impossible to view him and his situation with anything other than the highest compassion.

Because the townspeople? They're pretty great. Instead of trying to tell him that his girlfriend isn't real, or laughing at him to his face, or being outright terrible to him, as you might expect, you know, actual people to be, they're actually completely decent, embracing 'Bianca' as Lars's real girlfriend and including her in basically all of the town's events. It actually gets so that you almost (almost) forget that, oh yeah, she is a sex doll, because she's such a focal point of the movie, and the way Lars acts towards her is so genuine that she almost becomes like a real character. It's the strangest thing.

A lot of this movie rests on Ryan Gosling, and, as ever, he's kind of fantastic. The main reason you don't want to laugh at Lars is because of the way he plays him, as someone who goes out of his way not to interact with people, but who needs someone so much that he invents a person to be his everything. It's so tragic because, when you watch him interact with Bianca, you can see just how much he has to offer a real person, but he doesn't know how to be with someone real. It's interesting that, even though this film could be problematic in a kind of 'he doesn't know how to handle a real woman so he gets one who can't ever defy him' way, that's absolutely not the way things are set up in this movie, and the issue isn't that Lars wants a woman he can control, it's that he literally has no idea how to be with a real person.

I don't know how accurate this film is to the experience of people who have delusions, but I found it fascinating from a psychological perspective. The idea is that Lars created Bianca (as a real person, he didn't, like, build her) because he needed her for some reason, which, I think, essentially spawns from the fact that his mother died giving birth to him (there's more basis to it than this, but this is the root of his issues). I am actually really interested in what it must be like to be the child whose mother died in childbirth- to know that, you were something she wanted so much, and yet you also played a part in her death. There's absolutely no way you can blame the baby for this, but how much blame must those children take on themselves, and how does that affect them through their lives?

I'm going to stop rambling on about this now before I give away, you know, the entire film, but please- don't let the fact that this movie involves a sex doll and Ryan Gosling put you off, because rather than that being as gross as it sounds, it's such a sweet story about a man trying to work his way through his issues without even realising that's what he's doing, and it's so sweet that he doesn't even use the doll in the way it's intended because, and I quote, 'she wants to wait until we're married.' It's interesting, it's definitely different, and it's worth an hour and three quarters of your time. Email ThisBlogThis!Share to TwitterShare to FacebookShare to Pinterest
Labels: Just break my heart why don't you, Seriously...WATCH THIS