Sunday Sundries: Where I've Been, and Where I Am Now

Completely just assuming you're all celebrating about this.

I have also not been NaNoWriMo-ing, but I feel like it was fortunate that I said I was going to be this month so, you know, you didn't worry and all. Did you worry? You shouldn't have been worried. But I apologise all the same, and hey! I'm back! Or that, at least, is the plan.

I don't even have tons to report from my time away, if I'm honest. Well, I have one MEGA thing to report, but other than that... Work got kind of crazy at the end of last week (and I was still doing NaNoWriMo at that point), then I went to London with Frances on Saturday, and I've been vaguely ill (bit of a cold) for the last week. So, excuses excuses, I know, but all of that happens to be true!

But the mega thing... BLOGGER MEET UP IN LEEDS! So, the Tuesday just gone, at a strange and mythical hour, I met Bex at Kings Cross Station (yes, we geeked out at Harry Potter a bit. Yes, it was awesome.) and we took a stupidly long day trip to Leeds. The train took about two and a half hours, but get this- Bex and I talked the whole time and it felt like it took about twenty minutes, so that was awesome. Tired and disheveled, we valiantly walked through the ticket barriers, and who did our eyes behold? Why, it was Ellie, Hanna and Charlotte, of course!

So, we were all together and it was SO EXCITING because I had totally met Bex and Hanna before, but Ellie and Charlotte! NEW bloggers! Plus, Ellie is my blog wife (which is totally a thing- we got married in the comments on one of my posts once, I think) so that was pretty special and miraculous. Plus, Charlotte is notorious in my brain for being a person on the internet WITHOUT A FACE, so seeing that she had one was preeeeetty cool.

Anyway. So we were in Leeds! The people were just better than the people down south (i.e. they weren't all dicks), the air was slightly chillier, I was back in Yorkshire and everything was great. We went to have lunch in the Trinity Centre, which is VERY COOL and also I would probably totally live there and stuff. While we were eating, Hanna and Charlotte devised a plan to maximise our book shopping and IT TOTALLY WORKED. We made our way round all the bookshops of Leeds, with minimal fuss, but maximal book buying. It. Was. Awesome. 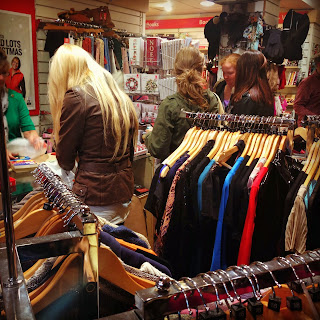 Book bloggers in their natural habitat.
You can get a more detailed route of our book shopping from Ellie's post, if you so desire, but suffice to say, we bought a LOT of books (at last count, I believe it was 64. Between FIVE of us. Yeah, you do that maths.) and we talked a lot and just generally it was awesome and fun and the best. I've said it before, and I'll say it every time I meet a new one of you people, but meeting people you know on the internet is kind of the best thing ever- you've laid all the foundations for everything, you already know each other so well, it's just the meeting each other's faces that's the thing. It's at once the most exciting thing, and also kind of no-big-deal, because it's almost like we see each other nearly daily. Just not in person. 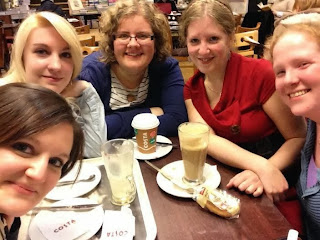 And here are our faces all together in one photo! We had to have a coffee (hot chocolate) in Waterstones because OMG exhausted. These ladies know how to book shop.

But anyway, the point is BOOKS! (That is so not the point, but it's what I'm going to talk about next, so there). I know you want to see what I bought, and I want to show you, so this is all working out swimmingly. 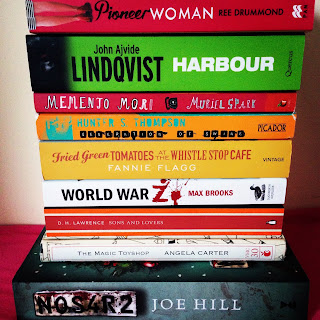 TA-DA! So I've just realised that these are really incorrectly in order compared to where/when I bought them, but NEVER MIND. So the top three are Pioneer Woman by Ree Drummond (have you read her blog? I sort of love her blog), Harbour by John Ajvide Lindqvist, and Memento Mori by Muriel Spark. I got these in a 3 for £5 deal in The Works, and really I just wanted Harbour, but then I saw the Pioneer Woman book and was like YEAH, so Memento Mori is a bit of a wildcard. So basically, if anyone wants to tell me that it's fabulous, that would be ok. The next two are Generation of Swine by Hunter S Thompson and Fried Green Tomatoes at the Whistle Stop Cafe by Fannie Flagg, both of which I got at HMV, and both of which I'm pretty excited about- I feel like Alice said Fried Green Tomatoes is really good, and I know that Kayleigh loves Thompson, and I'm excited to read more by him. See, guys? I took ALL of you with me to Leeds!

And then, in Waterstones, I got a teeny bit carried away and sort of bought 4 books. Which I know, I know, isn't that many, but I basically never buy new books, and if I do it's one at a time, so this was like a big deal for me! But I'm pretty pleased with what I got. *clears throat importantly* So, there's World War Z by Max Brooks because Alley apparently reads it ALL THE TIME, so it must be good. And then I got Sons and Lovers by D H Lawrence because Penguin English Libraryyyy, and The Magic Toyshop by Angela Carter because beautiful Virago editiooooon, and, finally, Nos4r2 by Joe Hill because I am fully caving to the Joe Hill peer pressure even if it does put me even further behind at reading Papa King's stuff. Plus, Nos4r2 is apparently a CHRISTMAS horror story, so it'll totally make me feel festive, right? (Probably not.)

So all of that happened, then after our coffee, we headed back to Leeds Station, triumphant but sad to leave each other, excited to read our books, but sad that the day was over (this might have just been me, wouldn't like to speak for everyone!). The Northern lasses got their trains/went to meet their manfriends, and Bex and I decided to get a bit of dinner before our two and a bit hour journey back to London. So we did that, and I got her to pose with all our books 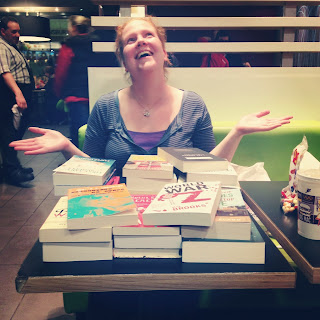 Yeah, those are just the books TWO of us bought. It was mega.
And we leisurely strolled to get our train. Which was delayed. By about an hour. Now, Leeds Station is nice and everything, but there isn't really enough to keep you occupied in it for an hour, but somehow, SOMEHOW we valiantly struggled on, looking in two separate WHSmiths and generally keeping ourselves occupied. One of us might have moaned a bit, but the other one of us might have a one year old child so I think she was ok with it. Probably... But anyway! Finally we left Leeds and its wonders behind, spent another two and a bit hours having a giant chat, and said our goodbyes on the tube (I HATE doing that. So rush-y) and went back to our separate homes. It was magnificent.

I realise that this post in obnoxiously long already, so I shan't labour any more anythings, but (BUT!) I have promised a tour of my new room, and that, my pretties, is what you shall get, in the form of four pictures. Minimal words, I swear. 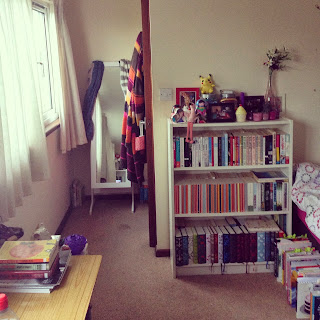 Bookcase, recipe books at the end of my bed, mirror. The door to my room is there, and it opens on to the mirror. My hope is that I won't accidentally smash it one day, but the chances are I will. 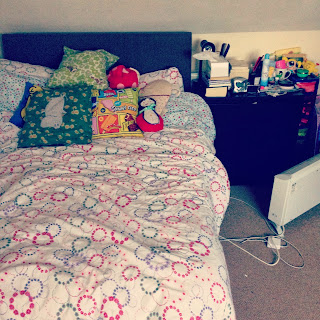 Bed, glorious bed. Also my IKEA chest of drawers that I BUILT MYSELF and a heater because shit, attics are cold. Not pictured- my laundry basket. Which is pretty full, tbh. 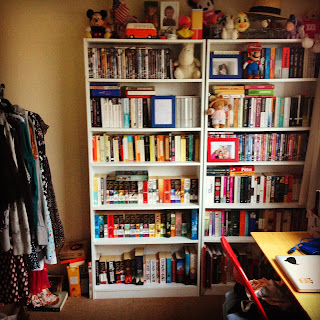 Bookcases of JOYYYY. Except when I was building them, they were bookcases of horror, but NEVER MIND THAT. To the side there are basically all my clothes, on a rail, which I love. 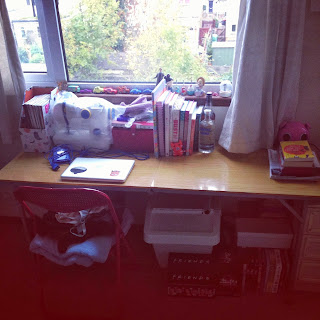 This is my sewing/booze/work table. My library books are on one end, my laptop theoretically lives there, and all my TV DVDs are under it. We can totally pretend that it looks like this all the time, but realistically, I tidied that shit WAY up before I took this. That's how I roll.

See! My room! I'm especially happy I did this because now my room is HELLA tidy and that's just the best. I mean, it'll last for about a day or something, but right now I'm really happy with it! I don't feel like the pictures really do the room justice size-wise, because it's kind of huge. Or at least huge compared to what I'm used to. Typing huge a lot has made me feel really uncomfortable, so I'm going to stop now. Huge.

Now tell me what you've been doing and make your comments so so long, I have MISSED this!
Posted by Laura at 10:55