Devouring Books: The Year of Magical Thinking by Joan Didion 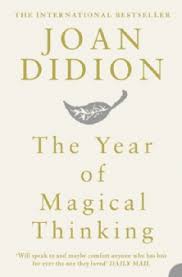 Joan Didion is one of those writers who I'd heard a lot about (although I don't know where from), but who I had never actually read (see also: Alice Munro, Charles Bukowski, Zadie Smith, I could go on but you don't want me to...) I have had a couple of her books for a while now, so obviously I thought it would be a good idea to read her memoir of grief over her husband's death while I'm in a fairly fragile state about death and, you know, all sad things.

It wasn't really a good idea. But read it I did, and I actually got a lot out of it. There are no inspiring words about meaningful lives lived, or 'oh wells' of surviving, but instead, a lot of the absolute what-the-fuckery of grieving. The crazy thinking, the running through events over and over and over again in your brain, trying to see how they could have been different, how you could have made them different, and the wilful forgetting that, actually, they won't need their stuff anymore because they're not coming back. It's honest, and raw, and beautiful and devastating, and so different from a typical grief memoir that I can't even deal with it.

So. I took this as my train read one day because it's a pretty light book and I wanted to read some Didion. That first time, I cried a little bit on the train. The next time I read it, also on the train, I cried a little bit more. And repeat for the next couple of times I read it. It got easier as it went on, but it still kind of hurt to read, and it's the weirdest thing, because The Year of Magical Thinking manages to be both an intensely personal memoir about exactly how Didion felt after her husband died, and to say something more universal about death and how it affects us. I still don't know exactly how that happens, but somehow it does, unless, of course, my experience of grief has been similar to Didion's, and no one else has had such an experience, which, you know, I doubt.

I don't really have much more to say about this book, because, I mean, memoir about grief, you get the gist. I don't know if I'd recommend reading it soon after the death of someone you loved, but you know if it's the kind of thing you're going to find useful, and I for one find the majority of my camaraderie in books. Reading is kind of how I work things out, so this was sort of a perfect timing read for me, crying on the train aside. Most of all, it's made me want to read all of the Didion, because I'd really like to read things about her that won't have me crying on public transport, and because she's really a kind of awesome writer.

And, because this wasn't really a review, some quotes for you:
"In both England and the United States, he observed, the contemporary trend was 'to treat mourning as morbid self-indulgence, and to give social admiration to the bereaved who hide their grief so fully that no one would guess anything had ever happened.'"

"In each of those long illnesses the possibility of death had been in the picture... Yet having seen the picture in no way deflected, when it came, the swift empty loss of the actual event. It was still black and white. Each of them had been in the last instant alive, and then dead."

"We have no way of knowing that the funeral itself will be anodyne, a kind of narcotic regression in which we are wrapped in the care of others and the gravity and meaning of the occasion. Nor can we know ahead of the fact (and here lies the heart of grief as we imagine it and grief as it is) the unending absence that follows, the void, the very opposite of meaning, the relentless succession of moments during which we will confront the experience of meaninglessness itself."

"We imagined we knew everything the other thought, even when we did not necessarily want to know it, but in fact, I have come to see, we knew not the smallest fraction of what there was to know."
Posted by Laura at 08:00