Girls: I see what you're doing here (sorta) 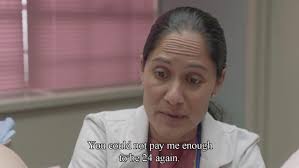 Girls is one of those programmes that seems to have been written about almost more than it's been watched. It seems like everyone* has to have an opinion on it, and I've read so many things about whether or not it's racist, or not aware enough of white privilege, or any of those extremely important things that somehow aren't ever talked about with say The Sopranos, or Breaking Bad, or any show that features predominately white men, but there you go. I think that the fact that these conversations are being had is actually a really good thing (20 years ago, when Friends came out, I can guarantee that no one was saying 'but why are they all white? This isn't representative of New York') but it annoys me that they're all targeted at Girls when so many other shows also fail in inclusivity.

But. This isn't even what I want to talk about, so I'm going to move on.

I've been thinking a lot about Girls since I read this recap after the most recent episode. Girls gives us four, mostly unlikeable characters to think about and talk about** but of these, Hannah is the most developed, and probably the most interesting to me. I feel like I should give a little summary of her character, but you're not really going to be reading this unless you watch Girls, are you? But ok, just in case: Hannah is an aspiring writer, sometimes OCD sufferer, who has trouble expressing the things she wants from other people and is usually the most self-centred person anyone has ever come across. Apart from Jessa, probably, but that's another issue.

So, in this most recent episode, Hannah goes to her book editor's funeral, where, you know, people are sad and things, and all she can talk about is the future of her as yet unpublished book. It's possibly fair enough to be concerned about this, but to constantly bring it up at a funeral? DOES SHE HAVE NO SHAME?***This has all really served to further reinforce Hannah's selfishness and her complete inability to act appropriately in any situation, and it was really annoying. The other thing we really learnt about her this week was that her book is literally just things that have happened to her in her life, and she believes that, without more experiences that have probably damaged her a fair amount, she'll be ruined as a writer because apparently she can't make things up? I don't know. But the point is, I think this tallies with a lot of things we already know about Hannah, and so I think we've come to an interesting point in the series.

Here's what I'm getting at: At the start, Hannah likes this guy (Adam) and he doesn't really seem to be that into her, and she keeps going back to him and it's really really difficult for us to see why. Then, later in the first season, things switch a little, and we see that, actually, Hannah has been at fault in their relationship by never ever asking for anything of him, and that Adam isn't as bad of a guy as we maybe thought. I feel like what we've learnt now is, the reason Hannah kept going back was for the experience. Here's this guy who doesn't treat her well at all, but he's kind of weird and could do strange things at any time, so she might as well keep seeing him. I think I'm probably over-simplifying things slightly (I think she genuinely liked him too, but that's not all that was going on) but that's definitely a thing I think about.

And then there are all the other things she does that seem exciting and interesting, but it's like, she does them to say that she's done them, rather than because she actually wants to. Which, I suppose, is fine for her to do if she thinks it's going to help her as a writer, but wouldn't it actually be more honest for Hannah to sit down and listen to herself and actually think about the things that she wants to do, and things which might make her happy, instead of searching for the next thing that might give her material.  I'm actually only just realising how awesome this is of Lena Dunham because in a way, isn't this what so many people do now? Because Facebook and Twitter and Instagram all exist, there's a certain amount of pressure to at least look like you're living a certain way, so even if you don't necessarily want to do something, you might do it anyway because it 'looks cool.'

A giant rave looks cooler on Instagram than reading a book, is what I'm saying, but only one of them is going to make you smarter. (Why yes, I am 80 years old.)

And then there's the lack of empathy thing. I don't know if I want to say that Hannah has always lacked empathy, and she's definitely not the only character you can charge with it, but there's a definite lack in her relationships with others because she doesn't really seem to care how they feel. I'm not even sure that the problem is a lack of caring, so much as caring SO MUCH about herself that the thoughts and feelings and actions of others that aren't about her are just like white noise that doesn't really get through. Hannah is the centre of the Universe, and that's the way she likes it, and that's that.

There are so many examples of this self-absorption, but this week's phone call with her dad, where he mentions he's had a procedure and she doesn't really seem to hear him kind of beat everything else in the selfishness stakes for me. But then, I guess I'm forgetting the time her editor died and she only thought about herself, and the time her friend had sex with her gay ex-boyfriend and she only thought about herself (rather than her friend's implosion) and the time she thought collecting her friend from rehab would be a good experience to write about.

I just... It's becoming really really difficult to like Hannah, and I think that's kind of the point- you're not supposed to like her, maybe you're just supposed to pity her for being 25 and not having a clue what she's doing, or maybe you're supposed to look at her and go 'daaaamn, am I like that? I MUST CHANGE MY WAYS' because 20-something girls? Sort. It. Out. Something which the above article really got me thinking about though was the idea that actually, by only thinking about herself, Hannah is missing out so so much on the experiences and lives of others. Not only would paying attention to this make Hannah a better person, it would also make her a better writer because only writing from your own perspective? Not necessarily all that interesting. Or at least not after the first book.

Basically, I don't really have a basically to sum all this up with. This is more just a 'look at these things I've observed from Girls, at least Hannah's character is consistent!' kind of thing. I'd love to speculate on where the rest of this season might be going, but I honestly don't know- if Hannah could grow and learn to listen to others then that would be awesome, but I don't know if she might be going the other way and be about to stab someone or something 'for the experience'. (Probably not that, it's not really that kind of show) Either way, I know I'll be there watching it, you know. For the experience.

Have you been watching Girls? TELL ME THE THINGS YOU THINK AND FEEL.


*'Everyone' in internet terms, of course. I think I know maybe one person in real life who's actually watched it.
**And and they all have alliterative names and I only realised that the other day and it's very exciting to me!
***She does not. I think that's most of the point.
Posted by Laura at 12:22