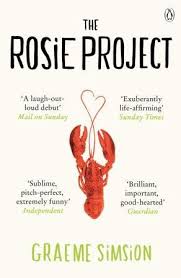 "But why, why, why can't people just say what they mean?"

This post might not be a review so much as a load of confessions about The Rosie Project as I experienced it. I HAVE CONFESSIONS AND YOU PROBABLY WON'T LIKE ALL OF THEM.

But enough with the ominous gifs and onto The Rosie Project.

Confession 1: I sort of didn't like The Rosie Project to begin with. I had all these expectations and all this hype to deal with, since about eleventy billion of you read and loved it beyond all reasonable... reason, and hey, I trust you guys. Hopes were the HIGHEST EVER, and reality was slightly not that. It was probably all the Sheldon Cooper comparisons flying around reviews of The Rosie Project, so I got confused and thought that maybe I didn't like Professor Don Tillman, because I fucking hate The Big Bang Theory.

Confession 2: Then I cried on the bus. I didn't mean to cry on the bus, especially since I'd already decided not to like Don, but then there's the bit with Daphne. Which I'm NOT going to tell you about because it's the saddest and the sweetest and you deserve to discover it for yourself, but guys who have read it- DAPHNE, right? She made my heart hurt. And made me cry real tears of crying. And then I had a whole new perspective on Don, even if he wouldn't have had a clue why I was crying.

Confession 3: I wish I knew more about Psychology (I know SOME stuff. Like, I have an A Level in it. But I wish I knew MORE) because I really want to know what Don's deal is. It's definitely implied that he has, or has something close to Asperger Syndrome, but... I don't know. The point, though, is that Don has a really different way of looking at and interacting with the world, which is sometimes hilarious, sometimes frustrating (both to him and the reader) and sometimes creates unexpected results. We see the world through Don's eyes, which means we get a limited view of the emotions involved in the story- pretty odd for a love story, but it just means you work harder to figure out what's going on, which is always good. Go, subtext!

Confession 4: But sometimes... I kind of just wanted to see the story from Rosie's perspective. Or someone else's perspective. Someone who did bring emotion into things instead of either ignoring it or not really experiencing it. People are falling in love in this book (am I going to say who? I am not.) only it takes quite a bit of effort to get that and I'm not sure that's something I really appreciated? But this might just be because I kind of want A LOT OF EMOTION ALL THE TIME and I am not ashamed of that.

Confession 5: A lot of Don's organisational behaviour made a lot of sense to me, which reminds me that there are a few behaviours and things that I have that make me think I'm maybe higher on the autism spectrum than other people*. Just going to leave that information here.

Confession 6: I'm now wondering if the reason I love New York City is because its layout makes so much sense. It is ONE of the reasons. But probably not the main one. Also people go to New York in this book and it's absolutely the best part. And there are a lot of good parts.

Confession 7: I ended up really liking this book. So much that I read the last 100 pages or so in one go, outside in the cold without even realising it was really cold, and I finished the last FEW pages during my work break and I never read then because it's only 15 minutes long and girls gots to gossip (I can't even believe I typed that. Please let it be struck from the record). It definitely challenged me in a few ways, and there were times when I got incredibly frustrated with Don, but in the end... It's sweet. It's genuinely funny, and genuinely touching. I'm glad I read it, and I hope you do too- with slightly lower expectations than the ones I had, but still with hope in your heart and a song at your lips. Or something.

*I just took this test and didn't score high enough for actually being autistic, but did score higher than the average, which feels about right.
Posted by Laura at 08:30