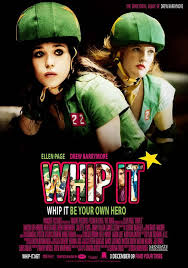 If you haven't seen Whip It yet, then I really don't know what to do with you. It's one of those films that I was really excited about for a really long time before it came out, and then it was released in about 5 cinemas and so I never saw it until it came out on DVD. Luckily for me, it's usually on TV about once a month or so (it used to be on Netflix, but apparently not anymore...) AND I'm usually watching TV when it's on so I watch parts of it all the time.

This happened the other week, and this time, I had a little bit of an epiphany. Whip It, in case you don't know, is the story of Bliss Cavendar (Ellen Page), a kind of shy, slightly awkward girl from Texas who, once she knows about it, wants to be a roller derby girl more than anything else in the whole world. While it's mostly a film about growing up and finding peace with your mother and being a best friend and being a better person, it's really the whole roller derby thing that's the best thing. And I love it.

My revelation, though, came when I realised that, for Bliss, her extra-curricular activities have the option of taking one of two paths. The choice her mother wants to make for her is that of the beauty queen- she forces encourages her to take part in beauty pageants which really don't fulfil Bliss in any way. The choice she wants to make for herself, of course, is roller derby- a (kinda) death defying sport where women roller skate around a track, trying to overtake each other and getting kind of battered in the process. It. Looks. Awesome. You know, in case that wasn't clear.

So. My thing is this. Other than that it's Bliss's own choice to participate in roller derby, and she's really only going along with the beauty pageant thing to please her mother, it seems to me that roller derby has about a million other advantages over beauty pageants.* I'm not entirely sure what beauty pageants teach young women other than how to be passive, look nice, and compete with other girls over who is the most physically attractive, as if that's how people should be evaluated. It seems to me that roller derby teaches actual lessons- how women should work together, how action is better than passivity, how sport can actually be kind of awesome. AND they manage to do all of this and still look pretty awesome, but that's absolutely a secondary factor.

The thing about this isn't so much that I think roller derby is a better way to spend ones time than beauty pageants, but more that, in terms of this movie, I think this is literally what they're saying. It's not really an important plot point for Bliss's 'other option' to be beauty pageants, but that's what it is, and this film is practically screaming 'THERE IS ANOTHER WAY. Or, in fact, there are probably many other ways but we're going to look at roller derby because LOOK HOW AWESOME IT IS.' So you've kind of got a mini-critique of beauty pageants tied up with all of the other awesome stuff there is to see in this film. OR I've seen it too many times and thought too much about it.

In conclusion: I'd really like to be a roller derby girl. I can make this happen, correct?

*Can you even believe that I don't think beauty pageants are cool? How out of character for me!
Beauty Queen vs Roller derby champ. Discuss.
Posted by Laura at 08:00