Devouring Stephen King: From A Buick 8 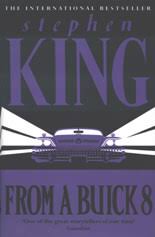 Oh man. This book. Before I tell you anything about it, I should tell you that it took me about a month to read. This was not a month where I didn't have much reading time, because, let's face it, the days have been sunny and I have two extra ones off work now. I found myself actively avoiding reading because I wasn't especially grabbed by this book, but I also wanted to finish it badly because I'm desperate to read the last three Dark Tower books this summer, and they're next. And so, finish it I have. Reluctantly.

I'm being a little bit harsh, I think. There's nothing actively wrong with this book (or... well... there actually is, but we'll get to that later) and it's definitely not in league with, say, The Tommyknockers for  sucking. It does a couple of things really well, mainly in making you really care about the characters (King's speciality, really) and including some truly upsetting and, you know, disgusting descriptions. A lot of the characters throw up a lot in these books, and it's always for a truly legitimate reason. There is really some grossness in this book.

A synopsis: a young boy whose dad, a Pennsylvania Police Officer, has just been killed on the job, is hanging around the police barracks, trying to feel closer to his dad and work through his grief. Along the way, he discovers an old Buick in one of the sheds, a Buick with a sinister history and some creepy, creepy shit going on around it. Through a lot of reminiscence from the police officers who worked with his dad, the full history of the car is revealed, and a lot of gross stories are told.

My main issue with the story is pretty much all about its structure. Because so much of it is told through memories (obviously it starts in the present, but not much dramatic is happening there) there isn't much immediacy to the story (or stories, I guess, it feels pretty piecemeal)- you know that, anyone in danger is probably going to be ok, since they're telling the story, or you know they won't be ok, because they're not. Not just that, the stories themselves get pretty repetitive, pretty quickly- even though each incident is its own kind of disgusting, they all go along the same lines and once you've read one part of it, you've kind of read it all.

However- and I think this is the thing that saves this book from actually being awful- there is a certain awareness from King and even one of his characters that this method of storytelling isn't necessarily the most effective. Or, more than that, it's that this telling of the most dramatic moments of a whole history doesn't really tell the full story at all. It doesn't tell you about the times where nothing much happened for a long time- where people got married and had children and got divorced and just generally lived their everyday lives without much extraordinary to break up the days. This reflection on a storytelling method itself, is actually one of the most interesting things about the book, and kept me actually interested in any of the book.

Well, that and the way in which the police officers constantly describe each other as a family. I'm a big fan of family, whether or not that's the one you're born into, one you build yourself, or one that is formed when you work together in extraordinary circumstances. The latter two of these tend to be more interesting to read about, and when it comes to the police, it was fascinating to see how even this fictional family ticked. Close to the central characters or not, the loyalty and shared secrecy of all the police officers was interesting, as was their genuine affection for each other, and friends lost along the way. It all felt very true to how I'd imagine the police would be, and the afterword tells me that King actually did a lot of research with police in Pennsylvania, so I guess it kind of is. Or at least should be.

So. It's definitely not one of King's best, and it did take me a really long time to get through it, but it did have some redeeming factors. At this point of reading Stephen King, I honestly feel like a teacher, who knows that their student can do and has done better, but can't be that mad cause it wasn't that bad. It just isn't that great, either.
Posted by Laura at 08:30