Look, I told you I'd talk about Shakespeare again! Look at us being all smart! (I'm still procrastinating from that essay I told you about on Sunday. It's pretty bad. Still, I used to write essays on the weekend before they were due in on the Monday, and this one is for Thursday so it'll be fine! Right..?)

Anyway... Before this whole Shakespeare Masters thing, I hadn't read a Shakespeare History. This is a lie, because I had in fact read Richard III, but I consider that more of a Tragedy than a History, possibly because I studied Richard III in actual history, and... Shakespeare is full of shit. I mean, I remember my History teacher basically saying that in not so many words, so I consider Richard III preeeetty much fiction.

However! (Watch out, there's some learning coming!) It seems that basically all of the histories are like this- they're essentially a specific version of history that was popular in Elizabethan times, with some added details that serve the narrative well, and some theatrical flourishes that are just for the lucky viewers. Shakespeare essentially wrote two sets (or tetralogies, if you want to be all smart about it) of history plays, where he already mixed up history: Henry VI Parts One, Two and Three and Richard III were written first although historically later, and Richard II, Henry IV Parts One and Two, and Henry V were written later. We studied the second tetralogy, mainly, I think, because why would we study the one I had actually read a play from? That would just be crazy! (Seriously, for the first 6 weeks, we studied 7 plays and I'd read 1. DIFFICULT TIMES)

But anyway, here's some stuff I think about those plays. I still don't exactly love the Histories, but I'm more intrigued by them and think some of the issues surrounding them are interesting. But the plays themselves? Well... 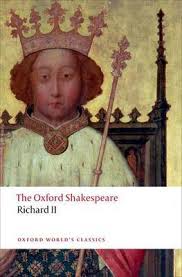 I actually really liked Richard II, and if you like reading Shakespeare just for the pretty pretty sounds his words make in your head (Um... that's not me? I totally have more reasons for studying him?) then you'll pretty much love this because it's written entirely in verse. I feel like that sounds like it sucks, but actually it's just like... *sigh* so pretty. I might just be making shit up here, but I feel like this has an important function, in that Richard II is the last 'rightful' king in this tetralogy, so it's almost like he gets all the kingly language before everything turns to shit. That's a technical term, btdubs. The verseyness also makes it all very DRAMATIC (Richard II is a pretty dramatic king. And by dramatic, I mean he seems kind of gay. He probably was at least bi because kings. They can do what they want) which is appropriate because it's all about rebellion and deposing and Bolingbroke (later Henry IV) being kind of an asshole after Richard II was kind of an asshole to him.

Basically, I really liked it, and I now idealise it in my brain because the Henrys... Well, you'll see.

There's this soliloquy at the end of Act 1 Scene 2 given by the future Henry V that reminded me why I love Shakespeare, why I was spending my Saturday trying to read both parts of Henry IV (I know, right?) and why I continue living. It's pretty awesome and I kind of cheered at it whilst reading so there's that. As for the rest of Henry IV, Part One... Well. It's weird because if I consider it alongside second part, I love this one and haaaate that one, but even just this one... well, it's sort of all downhill after 1.2.

Ok, that's mean. It's not that bad! There's another rebellion trying to go down, Henry V (who is really the star of all three of the last plays in the tetralogy) is being all scoundrelly and, at least when he's Tom Hiddleston, very attractive, and there's a whole battle at the end and blah blah blah drama. Here's the thing though. I hate Falstaff. I fucking hate him so much. I don't find him even the tiniest bit funny, I'm weirdly annoyed with him for being a bad influence on little Henry V, even though Henry V reaaaally has the upper hand in that relationship and oh my GOD I just want him to shut up. I just... he's not a nice guy, and it kind of upsets me that people would think 'oh he's so funny LOL!' when actually he's just this massive asshole who should never have nice things happen to him. I just cannot with him.

But still. Henry IV, Part One, is fine.

I hate Henry IV, Part Two. There, I said it. It doesn't help that I really did read it straight after part one (well, part of it... I finished it on the Sunday) when I'd pretty much had my fill of Shakespeare for that one weekend and oh wow, the cruelty of having to read two plays in one week. Just, no. However. Henry IV, Part Two really does have its own issues that I can't deal with at all. There is SO MUCH Falstaff, SO MANY PUNS (of course Falstaff relies on puns for his comedy. Of course he does. Asshole) and there's less Henry IV to hang out with Falstaff and actually make his scenes relevant? This is all just me and my petty hatred, and I'm sure there are people who think Falstaff is the tits, but for me... Just no.

It's also just... generally crapper than part one? Like, there's kind of a rebellion but it doesn't really happen, it's not as funny, it's just... It's kind of like the Grease 2 of Shakespeare, if you know what I mean. It sucks, is what I'm saying. It does get better towards the end, so there's that, and I want to like it more, but I just... don't. So there.

I read Henry V (obviously). I half watched The Hollow Crown version whilst making notes for my essay. I still can't really tell you much about Henry V. I... There are speeches? And a fight? I mean, I could probably tell you more if I had actually made it to the seminar about it, but unfortunately, traffic, traffic, blah blah blah what can I say, I missed it. I thought I was going to like Henry V because of how much I liked the character in Henry IV, but it turns out that things change when you're king and you start talking about how you're going to rape all the women and put the babies' heads on pikes. And then there's fighting and killing and blah blah blah. I mean, it was still better than Henry IV, Part Two, but that's not really saying, well, anything. Aaaand so the histories might not be for me.

And finally, a note on women (of course). There are incredibly few women in these plays, and the ones that are there don't always speak English. As a result, women don't really have a voice in these plays, which seems about right because women don't really have a voice in history, I guess. It's interesting that, under a female monarch, Shakespeare decided not to include even a few more women (Henry V's mother, for example, is never seen... Although have I looked up if she would still have been alive? I have not.) It can be kind of frustrating to read, at least for me, because I always want to know 'what are the women doing?' and the answer in these plays is basically nothing, OR we don't even know... But they're not a part of the action! Goddammit.

Anyway. I'm glad I've now read some histories and I'm glad that part of the course is over. Bring on those tragedies and comedies, oh yeahhhhhh.
Posted by Laura at 08:30