Hi kids, tis Sunday again! Time to be deliriously happy for the opportunity to have a lie-in, and crushingly sad because, ya know, you (probably) have to go to work tomorrow.

This week has been pretty ok, and I'm sure that good things happened, but rather than talk about any of the week I'm just going to talk about Saturday and the London Bookshop Crawl because OH MY GOD IT WAS THE GREATEST THING IN THE WORLD EVER EVER EVER!

A little bit of background to the Bookshop Crawl- for many years now, Bex and I have been meeting up with many people from the internets to eat food and chat and buy books and generally be excellent people together. I know that a lot a lot of people do the same thing in maybe little groups, but after Bex, Katie and I went book shopping last Halloween (what else would a person do on Halloween?) Bex amazingly formulated and then only bloody executed the plan for mass blogger book shopping together, in London, on a Saturday, i.e. yesterday. So, whilst I only half jokingly now refer to myself as a founding member of the idea, I am fully in awe of what Bex has managed to pull together just by being an awesome and organised human being!

The day, though. It started for me a little bit late because I'm incapable of a) getting up in the mornings and b) remembering to set my alarm early enough that I'll have enough time to actually WALK to the station and not just magically be there. All this meant, though, was that I missed the assigned meeting point of Foyles, and caught up with everyone at Orbital Comics (an indie comic book shop near Leicester Square) instead. No drama! After locating our glorious leader, I was having a little browse when I MET ELLIE which was so awesome because I've been following her literally since she started blogging, and she's just as lovely as I thought she'd be.

Not long later, we were on our way to some secondhand and also really fancy bookshops (I'd look up their names but frankly I am much too lazy) where I got my hands on the Complete Brothers Grimm Fairytales and drooled over some signed Murakami first editions, and also met this Ellie who was also a delight to be around. I had slightly gotten separated from everyone else at this point, but Katie tracked me down and VERY sneakily suggested we go to Forbidden Planet- there's a bit of an in-joke here, but I've been yelling at Bex for MONTHS for the fact that the crawl wasn't officially visiting FP, hence the taking and sending of this photo: 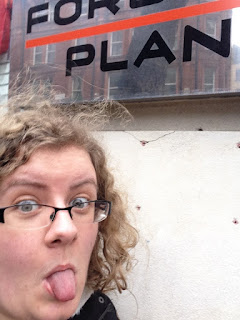 Because I am consistently mature and graceful. Anyway. It would have been rude to leave Forbidden Planet after all that with nothing, so I obviously had to buy The Diary of a Teenage Girl before Katie and I went to get noodles for lunch.

After lunch, everyone reunited and took the long long walk to Persephone Books. I was pretty excited about this stop because Katie and Bex went there on one trip before when I had to leave to learn some Shakespeare, and it seemed so excellent, but it turned out to be even more wonderful than I'd expected. This lovely lady gave us a talk on the history of Persephone and how they work, and then proceeded to make every single book they sell sound completely amazing. Somehow I managed to only leave with one (I really don't know how!) but I now basically need all of the Persephone books in the world (to be fair, at present there are only 115!)- note to everyone I know.

After Persephone (I know) we headed off to the London Review of Books Bookshop, which is right near the British Museum and SUCH an adorable shop. To me, it felt like the perfect size (not too big, not too small, goldilocks style) and pretty much had all the books a person could need, hence why I bought my last couple of books there- The Book of Laughter and Forgetting by Milan Kundera, and the hilariously named I Love Dick because there is no sense in which I do not need that book. None. Needed it. I especially loved the LRB Bookshop because, thanks to Bex's amazing skills, they gave us 10% off our purchases AND a free goody bag so I now have an extra bag with which to avoid paying 5p for bags, as well as pencils and coasters and postcards... You get the idea.

So. By this point we were some very very tired book bloggers, so we slowly and creakily made the trek over to Waterstones Piccadilly, Europe's biggest bookshop and my personal favourite bookshop that isn't The Strand in NYC. By this point, we really really really needed cake, so whilst Bex got us a table (for two, that we managed to squeeze 5 around) I got us cokes and the biggest slices of cake anyone has ever had. Rejuvenated after cake and MASSIVE SIT DOWNS, we got up again (standing. Ugh.) to wearily look around Waterstones. I had personally, I think, shot my proverbial wad at this point, so more or less followed Bex and Katie around while they chose books, and then plaintively asked if we could find somewhere to sit down. We did! And whilst it was so great meeting all the other bloggery babes, it was also so lovely to have half an hour with just the three of us, founding members, I may say, of the day's expedition.

After good pizza and good conversation, it was time for us all to make our various ways home- I left feeling slightly smug about only having a 25 minute train journey home, but that quickly evaporated when I realised how windy and rainy it was and how much I had to PRESERVE THE BOOKS. I was both exhausted and buzzing when I got home, so although I couldn't deal with watching TV or anything so strenuous, I could apparently deal with taking photos of my beautiful books: 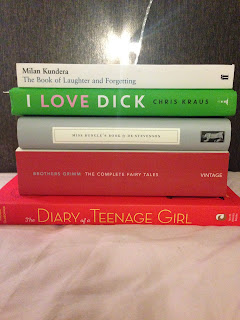 and, well, writing this post about my day- I'm going to say, literally the best one of the year so far! Long may it continue.

So, to summarise- meeting people from the internet remains one of the greatest things you can do, Bex is an absolute legend for organising all of this, and oh man, I really fucking love books. I think Bex is planning on making this an annual event, so I recommend following her on twitter if you want to buy books amongst 20-or so likeminded people at some point in the future. ALSO ON TWITTER, I fully recommend checking out the #LondonBookshopCrawl hashtag to have a gander at everyone's shenanigans, and if you were there (I WAS THERE, MAN!) and have written a post about it, please post a link in the comments so I can relive the day through you, too!

Seriously. BEST DAY OF THE YEAR SO FAR!
Posted by Laura at 08:30