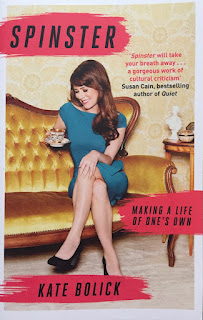 "Married women, especially those with children, tended to assume a superior stance, as if their insights into people and relationships came preapproved, even though single women drew from a larger store of experiences and had often seen more of the world."

When I bought Spinster (a mere couple of weeks ago, sorry #readmyowndamnbooks) I had a surprisingly strong idea what it was going to be like. Fairly strong stats, research, and information on single women throughout the centuries, what it means to be single today, and why it's totally ok to be building and living the life that's just for you, and no one else.

That is... not exactly what this book is. It's an odd mixture of memoir, some stats and whatnot, and then a study of 5 women writers that Bolick admires, none of whom were technically spinsters (I know) but all of whom had definite ideas about independence and womanhood that transcend others in their day(s), and also transcend the attitudes of many in today's world. If it sounds like a mess then I might not really be doing it justice, because actually it all falls together really well, Bolick is an excellent writer, and essentially I just really enjoyed reading the book.

Much as I enjoy learning things about obscure literary figures, it was really the things in between Edith Wharton and Charlotte Perkins Gilman's* life stories that I found most interesting. The idea that Bolick begins with and keeps coming back to is that of women and their place in society being defined by their relationships with men- either they're married, or waiting to get married, or past their prime for marriage, and so on. The same rule does not apply to men, and so, the question is, can women live fulfilling lives without marriage and children being marked as their greatest achievements?

In terms of the memoir parts of this book, Bolick is not really what one would typify as a spinster. She writes about her seemingly endless dealings with men (if she's not in a relationship, she seems to be dating a lot) but the crucial part of her life is that she gets to come home at the end of the day to a world she has created and that is all her own. Bolick's path to spinsterhood is driven by her understanding, in her late twenties, that really she's never been alone or faced the world entirely on her own terms, with no one- no parents, no boyfriend- standing by her side, and it's her journey to a greater sense of self awareness that's as interesting to read as anything else in the book. At times, though, it almost seems like a bogus kind of self-awareness, since she essentially describes her relationships and her dating life and still defines herself by her dealings with men as much as by her career or her friendships, and it gets a little bit confusing what her point is. She wants to be alone but also not alone, single but not celibate but also not single sometimes?

It's just, I think sometimes, it could have been a little more research, and a little less self, you know?

But anyway. I'm still really glad I read this if only because it made me think about the world and my own place in it in a slightly different way, which really all the best books should do. As a chronically single person (and not just the unmarried kind of single) I can't even really personally relate to Bolick as a human being, but I do have a lot of thoughts on spinsterhood now. Namely, these- I've been on my own for basically all of my adult life, which has given me ample time to understand that, realistically, I actually don't want to be alone forever. For me, family is the cornerstone of everything, and whilst the one I have is great, the opportunity to make my own seems amazing, but I also don't think that has to involve the absorption of one's entire personality into some kind of mummy-being (as Bolick really does seem to think, unwilling to give up any of her writing years to raising children).

But, at the same time, I'm comfortable enough with myself and my life and my interests (sooooo many interests...) that I feel like, if this is it, if it's just me now and forever, then that would be basically ok too. Bolick takes spinsterhood as some kind of achievement, but if it's chosen at the expense of love, or family, or all the other things you hold dear, then it doesn't really seem worth it to me. Bolick talks a lot about the spectre of the thing women fear the most, ending up as the 'crazy bag lady', and argues:

What is haunting about the bag lady is not only that she is left to wander the streets, cold and hungry, but that she's living proof of what it means not to be loved. Her apparition will endure as long as women consider the love of a man the most supreme of all social validations.

I disagree. What is haunting about the bag lady is that nobody loves her, and she is left to fend for herself, friendless and alone. Whilst I obviously agree that being loved isn't the only way to be validated (although, frankly, who even needs validation? Ok, most people, but shhhh), I think that loving others, and being loved in return is essentially the most important thing, for men and women, and the thing that defines our lives in the end, not how much work we did or how important and famous we were.

I realise that this review makes it sound like I disagreed with most of the book, but honestly I found it incredibly interesting and well written, and open enough so that I could disagree with certain points, without feeling like I would be stupid for arguing back. If you're interested in independent lady writers then this will be right up your street, and if you want to be entertained on the bus home from work for a week, then you should definitely read it.

*I know these guys aren't that obscure, but the three other women Bolick talks about I had never even encountered before.
Posted by Laura at 08:30