Devouring Books: Chavs: The Demonisation of the Working Class by Owen Jones 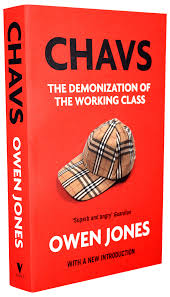 I come to my review of Chavs with a bit of a disclaimer- this book was, politically and socially and everything-ly, exactly what I wanted to read regarding Thatcherite politics and what they have done to the UK as a country and as a society. I have a hard time imagining that this is going to be interesting to anyone who doesn't care about politics, or doesn't know much about the ways that Thatcher has basically decimated the working class, or kind of doesn't care so much about UK politics and sociology, but then. This book is so well written that, even with no background, I think you could still be outraged, and horrified, and all of the other things that Jones wants you to feel over the course of this book.

Chav, for anyone who doesn't know, is a term used for an image of the kind of person that society doesn't like. Chavs are lazy, live off benefits, don't want to work, have loads of children to try and take advantage of the system, and essentially steal the money of hard working people to fund their self-indulgent lifestyles. Chav is a term often just applied to the working class en masse, so that people who are poor but work (i.e. the working class), terrified of being classified as chavs, move away from the identification of being this shitty person and, in turn, sell themselves short and allow for the problems of working class people to be ignored by the media and the government, and allow for the constant vilification of people on benefits.

Owen Jones really tries to dispel all of the current popular ideas about chavs, and he really does a stellar job. I can't get over how much I loved this book, and how insightful and straightforward it was, but I say this as a total leftie who pretty much think that the state owes its people the service of helping them out when they fall upon hard times. I'm sure someone with more right wing views reading this book would just roll their eyes and say 'well sure, but what about the chavs? They're an actual problem and they're terrible'. So said the man in Oxfordshire, who has never really met anyone from the working class, you know, ever.

Jones forms an argument in this book that traces a time line from Thatcher's destruction of all the manufacturing jobs in Britain and her selling of all the council housing in the 80s, to the state that the country now finds itself in. Combined with Thatcher's policies is the idea that is still current which suggests that people who fall upon hard times are entirely responsible for their own fates. Never mind that there are quite literally no jobs for people who are out of work, and never mind that there is quite literally no affordable housing anymore, people who are jobless and/or can't afford to pay their rent or mortgage are now considered to have failed somehow, rather than the government being considered as having failed them.

There's so much to talk about with this book that I definitely can't fit it all into this review, because for starters, you're all going to get bored. Fortunately, I've already ranted about this quite a lot with both my boyfriend and my best friend, so I guess I can trim the fat a little. One of the most interesting parts of this book to me was the role of the media in perpetuating the idea that working class people and people on benefits are terrible and lazy. It makes complete sense that politicians portray the working class as terrible because it serves their interests in being able to make crushing cuts to the welfare state (instead of, you know, TAXING THE RICH), but the media seems to willingly accept this too, for the pure reason that they literally don't know anyone who is working class. In order to work in the media, you need to both go to university and be able to afford to work for free for quite a while, and usually either one or both of these options simply aren't open to people whose parents aren't, well, if not rich then comfortable. The government and the media have become one circle of fear, telling working class people that they aren't good enough, and making everyone else believe it too.

It fucking sucks, is what it does.

Lest this become an unwelcome political rant, Imma stop right here. I will say that I think Chavs is a really important and eye-opening book, and I'm really glad I read it if only for some excellent statistics (did you know that Tax evasion costs the country 70x more than benefit fraud? Nope, and neither did I because members of the government and the media are much more likely to be doing the former than the latter so much better to focus on the poor, don't you think?) This book was originally published in 2012 and is only becoming more relevant as the current Conservative government continues to strip away the welfare state, replacing it with precisely nothing and, most recently, cutting £4 billion of welfare spending that's expected to put about 200,000 children under the poverty line.