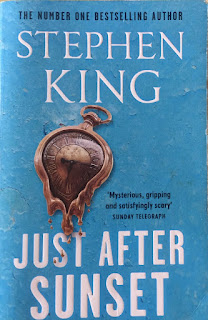 I finished Just After Sunset all the way back in (early) February, so I wouldn't expect this review to have anything substantial or interesting to it at all, if I was you. I know, I know, I'm being overwhelmingly positive here, but I'm just warning you, this is going to be a collection of vaguely remembered thoughts rather than anything else.

As if I have ever written in any other way...

Anyway! Just After Sunset is a collection of Stephen King short stories, and yay! We like those! I don't know if it was just because I hadn't read any for a while and had forgotten the quality of King's shorter work, but this collection really seemed especially good, with the exception of A Very Tight Place*, the final and most seriously disgusting story in the collection. And not even scary disgusting just, you know, disgusting.

Apart from that though, there's really just some stellar work going on here. There's a longer short story (but not quite a novella!) called N in this collection that kind of links mental illness and demonic happenings and it all seems very symbolic as well as genuinely freaking me the hell out. The first story in the book, Willa, is the one King credits with getting him back into short story writing again, and he praises it for that fact whilst also suggesting that it's not-so-great. Predictably, because I always disagree when he says stuff like this, I feel differently. Willa perfectly touched all of my happy places (ooer!)- a mysterious beginning, creepy happenings, all building to the only possible explanation, that's still one you're kind of surprised by. I liked it a lot, is what I'm saying.

This collection also sees King's first engagement with 9/11, and he takes the interesting angle of not even trying to imagine the human terror, but the potential supernatural power of The Things They Left Behind (which is also, clearly, the title of the story). It's not one of my favourites of the collection, but it is interesting to see King engage with one of the most important events of recent times and try and make something out of it that has a kind of renewing quality (as the end of this story does).

There are quite a few really short stories in this book, and they have at least as much of an impact, if not more, than some of the longer ones. I think talking about these in any sense is slightly redundant, in that if you talk about it a little, you've really given away the entire story, but the one that stands out in my mind concerns a girl who is just about to graduate from high school, ruminating about her future, but then sees her future being wiped out in a matter of seconds. If that one's not a little bit about 9/11 too, then I don't even know how to read anymore.** But for it to have stuck with me for longer than any of the other stories in the book says something about it's impact when compared to the longer works.

So there you have it. I still have no idea if this was actually any better than his other short story collections, but I definitely enjoyed it a lot either way. There are 13 stories in this book, and I can only think of one that I really didn't like, and two others that were kind of meh. I will take a 75% success rate for a book of short stories, and I will take it with pleasure. You probably should too.