Happy April, friends and internet peoples! Did I blog at all in March? I did, but only once and yes I am terrible still. But do I return once a month to talk about books a little bit? I certainly do, and I am here for that very purpose right now.

Firstly, some life things: I have been not-eating chocolate for all of March and it has been preeetty challenging (especially because it's been lent too so I've been coming up against people who say 'well I'm not eating chocolate for 40 days, sooooo...) and I'm so glad it's over. I may have already had some oreos and also some chocolate this morning and the day is still so incredibly young. The point, anyway, is that you can in fact sponsor me for my epic achievement if you so wish and you can do that riiiiight here: https://www.justgiving.com/fundraisi…/dechox2017laurarowsell

Other March things: Actually, it hasn't been super eventful. I got an unlimited cinema pass in, let's say, February (I have no idea) so I mostly just go to the movies (don't see Power Rangers, it is trash) and see my gentleman friend on the weekends (it's so great). Japanese classes have finished for Easter break so you would think that would give me more time, but honestly I'm struggling to do all the things I need to do, let alone the things I would like to do (like blogging). I did, however, go to my first burlesque show (so great), bought a new bed, went to birdworld and generally had a pretty nice month, lack of chocolate aside.

But what did I read, I hear you cry? Well, these books: 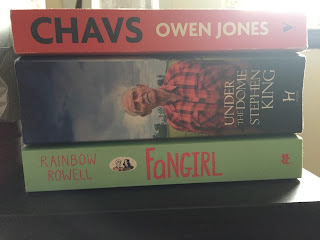 I did in fact only finish three books this month, but MAN these books. I loved every one of them and actually (optimistically) may even actually write reviews of them I know I say that all the time but seriously just woah. Let's go through them briefly though:

Fangirl by Rainbow Rowell
Well, obviously I already knew this one was good. I hadn't realised that I actually hadn't reread this book all the way through since it came out (I think I'd read the first 100 pages or so a couple more times) and well. I knew I loved it but I had forgotten how much and all the reasons why I loved Levi and just SIGH you guys. It was a really good book to read interspersed between the next book I read this month which was, may I just say, FUCKING INTENSE.

Under the Dome by Stephen King
Because honestly, when your town is enclosed in an invisible, seemingly unbreakable dome and is run by a psychopath, things turn pretty ugly pretty quickly. I've been excited to read this one ('that Stephen King book that's basically The Simpsons Movie') for a long time and I wasn't disappointed. I'll say more in real review, but this was honestly so good for Uncle Steve- so tightly contained and all loose ends tied up, all of the many many characters were kept track of and it was just stylistically so great even if I have a few reservations about stuff that I will save for a longer form review (*crosses fingers and hopes for the best*). But anyway, yes. Very good stuff.

Chavs: The Demonisation of the Working Class by Owen Jones
THIS BOOK IS SO GOOD. I really want to review it in a massive way because I have so much to say about it (mostly rants) but it's basically about the way that the working class has come to be viewed in Britain today, and how most people now consider themselves middle class rather than working class because they don't want to be associated with 'those people'. The book completely tears apart the idea that poor people are poor because of their own failures, instead pointing out the systemic and consistent government policies that have meant that the poor get poorer whilst the rich get richer (I'm sure you're familiar). It's an excellent look at Thatcher's politics, and the long lasting effects they have had on British society. I can't possibly comment on whether any of this book would mean anything to a non-British reader, but everything is explained so thoroughly  and written so clearly and accessibly that I can't imagine anyone not engaging with it, and getting mighty pissed off.

Annnnd that's what I read. I'm pretty impressed that I read anything other than the giant 880 pages of Under the Dome so I can't be mad that it was only three books. ONWARDS into April! I have the first 10 days (!!!) of the month off so plenty of time to read and eat chocolate and do all the fun, non-work things that my life desperately needs! Hope you have all had an excellent March, and let's do this April thing.
Posted by Laura at 09:09