Devouring Stephen King: The Wind Through The Keyhole 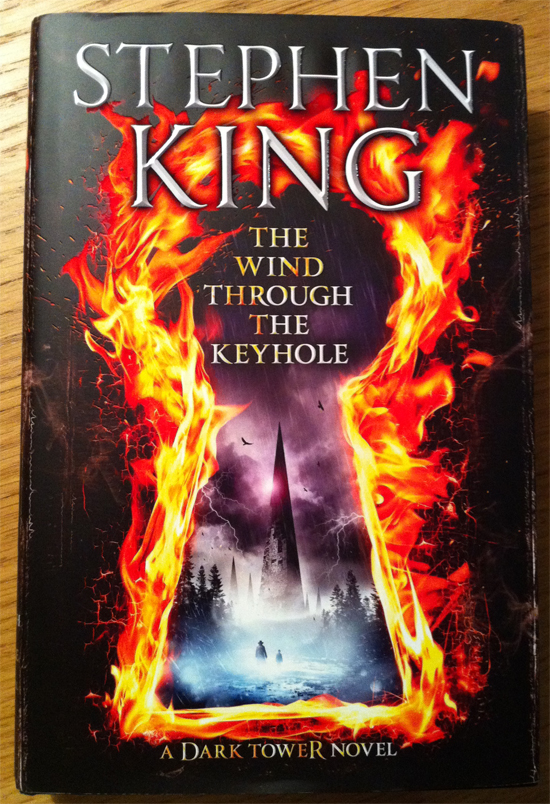 I don't think it's any secret that I'm a big fan of Stephen King's Dark Tower Series. I can't get enough of his ka-tet's noble journey throughout different landscapes and worlds to try and save the very fabric of reality itself, and I'm also super excited for the upcoming movie (mainly cause, have you SEEN Idris Elba?!) However. I also don't think it's any secret that the parts of these novels that are pure fantasy, sans savvy New Yorkers and trips to somewhere resembling our own world, are not exactly my favourite parts. Wizard and Glass is my least favourite of the series, for example, purely because it's a story about Roland's past, set entirely in Roland's world and ugh please just no.

It's really unsurprising to me, though, that The Wind Through The Keyhole, King's addendum to his Dark Tower series (published last, but set between books 4 and 5), delves deeper into the mythology of Roland's world. It's clearly a place that King loves exploring and creating in, even if I find it kind of tiresome, so let us all praise him for doing a thing that he loves. For my part, I'm still a little sore at the events of the 7th book, so the way this book teases us with a glimpse of the main characters at the beginning on the end, but otherwise focuses on two other stories felt like a little bit of an insult, at least to my Eddie, Susannah and Jake loving heart.

To it's credit, this book is structured really interestingly. Roland begins by telling one story, and then tells a story from his childhood within that story. I actually found the folk tale the more interesting one, because it felt to me like a pure fairy tale- a genre that King doesn't tackle very often (if ever...) but here is very good at. I know what you're thinking though (or actually, what I'm thinking)- if I don't like fantasy (mostly), then why do I like the tale that is fictional, even within the fiction?

I don't really have an answer, except to say that I guess I kind of like fairy tales, but also this one was REALLY COOL. There's a tiger and some murder and a quest, and yeah, I just really liked it. Roland's additional backstory in this book really didn't measure up to this secondary tale, and even felt like a plot device in order to just get to this piece of folklore. I didn't like the Roland stuff so much, but it was at least shorter, and who am I to chastise King for wanting to return to his happy place in such a way?

Besides, at least it wasn't as long as Wizard and Glass.

As always, you should probably take everything negative I've said about this book with a pinch of salt, since I finished it in a giant gulp and wasn't even mad about it. Because, you know, it's Stephen King. Even when he's not at his best, he's still kind of the best.