Aprilllllllll! I love April, not least because it's my birthday month, but this year I really loved it because I had the first 10 days off work, and then we had easter, and ok yes basically I only worked one full week all month. This meant I had so much time for reading (and, I hope you've noticed, blogging!) and honestly, it has been fucking joyful, I've loved it.

As well as all the reading, I have: been to Kew Gardens, been to Brighton, been to London Zoo, eaten a LOT of sugar (working on that), spent many many hours and days with that boyfriend type person of mine, restarted Japanese lessons after a looooooong break, went to a Beauty and the Beast themed afternoon tea and (AND) managed to get tickets to Angels in America which I will be seeing merely a week from Saturday *dies of excitement*.

It's been a good month, is what I'm trying to say.

I'm also fairly resolved (although I hesitate to say it cause, y'know, it's me) to bringing back Sunday Sundries posts starting this month, so expect to hear a lot from me that you probably didn't even want to hear. Is that cool, ok good.

BOOKS THO (with bonus chocolate frog!) 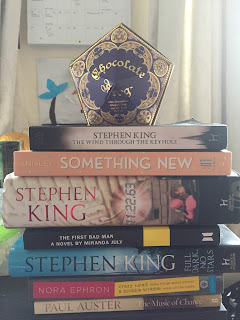 The Music of Chance by Paul Auster
This book was weeeeeird. I think I'm pretty used to Auster books being weird at this point, but this seemed especially random and strange but I think that was kind of the point. A man is left some money by a dead relative which he uses to literally drive around America for a couple of years and abdicate all adult responsibility (he has a daughter who lives with his sister, for instance). Just as the money is about to run out, he almost literally runs into a poker genius who he decides to fund in a game against two REALLY rich weirdos, and things go very much awry. I'm slightly ashamed to say that I don't even remember the end of this book now (it's only been a month, I need to step it up) but I do remember liking it at the time even if I can't remember it now. I'm usually guaranteed to like an Auster book, and this one did nothing to break that rule, even if it was, I shall say it again, pretty weird.

Crazy Salad and Scribble Scribble by Nora Ephron
This was originally two books that were combined into one after her death, I'm going to assume so that poor people like me could have easier and more affordable access to some of her earlier writing. Thanks, publishers! This was obviously great because Nora is the bestest, and I could read her writing on anything, anytime, forever. Crazy Salad is a collection of her essays about women, and they are especially excellent because they were written literally as second wave feminism was hitting its peak. There's stuff about Gloria Steinem and Betty Friedan (sort of nuts, apparently), but there's also stuff that isn't about prominent feminists but is tied into the entire movement anyway, including a stunning takedown of what I can only describe as vagina deodorant (Nora describes it better, of course). Scribble Scribble is a collection of essays about the media and, whilst Crazy Salad was my favourite because, you know, feminism, her takedowns of the media are pretty much as excellent as her takedowns of the patriarchy. Whilst there is an element of datedness to the articles (they are very much of their time) please see above re: reading anything by Nora ever. I believe I am rapidly running out of new-to-me Nora stuff to read, at which point I will simply be forced to re-read everything again because she is a complete and utter gem.

Full Dark, No Stars by Stephen King
Hey, I already reviewed this! But if reviews are a bit much for you, I shall summarise: four novellas, extremely dark stories (hence the title) read only when you're prepared for some very deep and dark stuff.

The First Bad Man by Miranda July
Let me preface this by saying that I think Miranda July is excellent. Her writing is great and her stories and subject matter don't shy away from difficult issues, and also issues that basically no one else writes about. I like her a lot but my god I found this book so stressful, essentially because you're trapped in the head of a character who quite clearly has a lot of mental problems. Her way of seeing the world is kind of warped, and being dragged into it as an outsider means that you both feel sorry for her and exasperated by her. The times that she has been isolated but can't quite, or chooses not to, see it are kind of upsetting, but the times she does really questionable things but can't predict the reaction of the person they relate to can be kind of disturbing. IT IS VERY STRESSFUL, and I probably wouldn't read it again, but I also wouldn't rescind reading it for the first time. It's a confusing mix of feelings, and allow me to conclude by saying, once again, that I really do think Miranda July is excellent.

Something New by Lucy Knisley
I have only read this once before, and it was when I was recovering from my operation last October. I liked it at the time, but only to the extent that I could like anything at that point, which is to say not very much. I reread it last weekend and ohhhh I love it. Knisley is basically my permanent favourite anyway, but her take on matrimony and weddings and cutting through all the bullshit that surrounds them to get to something beautiful and something she really wanted. I happen to know from instagram that she's currently inking a new book about babies and motherhood, and I can't wait to read her take on that, either.

The Wind Through The Keyhole by Stephen King
I managed to sneak this one in on the very last day in April, so I was pretty happy with that. I will be reviewing it because King, but let's just say that I feel very meh about The Dark Tower books that involve Roland's past, and this was one of those so sort of meh? But then also sort of not. You'll see (at some point, you know how it goes)

And that was April! TA DA! I'm pretty happy with my readings, and as I have literally no days off booked in May I don't at all expect to achieve anything like this this month. But we. Shall. See.
Posted by Laura at 18:38