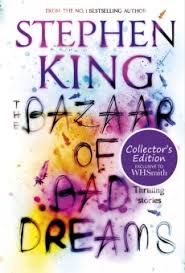 It should come as a surprise to literally nobody that, having read this book 2 months ago, I have absolutely no recollection of anything inside it. Nothing. I got nothing. Whilst this may be considered a reflection of its quality, it is in fact NOT because the one thing I DO remember about it is that it was excellent, and also that I felt like all the stories are good which basically never happens in a short story collection. (EDIT- I just looked at the Wikipedia page and there's this one story about baseball that I found SO BORING. But that's just me)

Because I have no memory (in my defence, a lot of Big Life Things have been happening since July) but I do have an internet connection, and, you know, wikipedia, Imma just go through the stories extremely briefly and rapidly and then you'll be convinced you need to read this, right? Right.

Mile 81: Violent car eats people at a deserted rest stop. I'm into it, I like when King does scary cars and there's a whole undertone of boy-learning-to-be-a-man that was also pretty good.

Premium Harmony: This is a nasty little story where a man's wife dies suddenly and unexpectedly in a shop whilst he's waiting in the car, and he just... doesn't... seem to care too much. One of my favourite King things is the everyday nastiness of regular people, and this story is basically that. Good stuff.

Batman and Robin have an Altercation: Essentially this is a story about road rage, but it's actually about watching one's parents age and all the sadness that goes along with that. The end is AWESOME.

The Dune: You know those stories that explain about a spooky thing, and you think for sure you know what the spooky thing has done this time but then it turns out you were wrong because you were supposed to be? (You probably don't because I've explained that horribly) BUT ANYWAY that is what this story is. So sue me, I like the cheap thrill of a twist ending.

Bad Little Kid: This story was HORRIBLE, but in a good way- the way in which you are as frustrated as the main character when a small child is doing evil deeds, because you know there's nothing you can do to stop this evil. I was so gripped, as well as so horrified. Also there's a good twist ending so you know you want to stick around for that.

A Death: This story was fun in the sense that it was a completely different style to King's usual work. It's essentially a Western, set in 1889, and involves the arrest, trial and execution (spoilers I guess, but it's fairly clearly going that way the whole story) of a man who constantly proclaims his innocence. There are tiny glimmers of The Green Mile in that sense, but mainly its just its own excellent thing.

Morality: Now THIS was good. A couple struggling with financial difficulties have to consider whether the wife should take her very wealthy employer's offer of a lot of money to do a very bad thing. As readers, we don't know what the bad thing is (it's pretty bad) (but maybe not as bad as you think) but it asks a lot of questions about people's limits and the lines they will cross to get what they want. It's been said that everyone has their price, and this story definitely takes that idea and runs with it.

Afterlife: Remember when I read Sum and loved it? (Probably not but let's go with this) This story is basically like King's contribution to that book. It's another among many versions of the afterlife, and it's also a reflection on the stubbornness of people even when they're being told the exact opposite of what they want to do.

Ur: I had very *side eye* feelings about Ur when I first heard about it because, you know, it's basically an advert for kindles, right? Well. Sort of. The word Kindle (which is, of course, a brand name) IS used an obnoxious number of times in this story, but it's still so substantial that I didn't really care? It has a kindle that can see into the future! And many heroics! And Dark Tower references! And yeah, basically I want to get me one of these Ur Kindles so that I can read everything Stephen King has written in all possible universes, is that ok?

Herman Wouk is Still Alive: The Wikipedia article for this story is annoyingly vague so I don't remember it too well... I just remember the vaguely depressing Thelma and Louise undertones (but like, waaaay more depressing than Thelma and Louise) and I can't even remember if it ends the way I think it does. Yay, I'm a good blogger!

Under the Weather: This story is the bessssssst. It's perfect and simple and perfect in its simplicity. I would say that you don't know what's going on until at least 3/4 of the way through (or maybe that's just me) but as soon as you do it's such an OH MY GOD moment and everything makes sense and it's horrible. I LOVE it.

Blockade Billy: Boring boring baseball, boring boring someone did something IDK let's just move on with our lives now.

Mister Yummy: Mister Yummy isn't super substantial, but it mainly left me with the idea that Death takes the form of the thing that most sexually aroused you in life. I'm weirdly kind of into this idea, and when I'm super super super old, I'm sure I'll see a Biscoff Krispy Kreme stalking me and waiting for the big moment.

The Little Green God of Agony: An unpleasant man has many pain, his physio doesn't believe it can hurt THAT much, is proved wrong. This story made me feel very uncomfortable in places, and believe me, you don't want to come across a little green god of agony. Just... No.

That Bus Is Another World: A teeny weeny story about the things we tell ourselves to go on with our lives. Pretty good.

Obits: Imagine you write mean obituaries and one day you write one for a real person and they die. TERRIFYING POWER that basically nobody wants- and you especially don't want anyone to find out about it lest they make you harness it for their own uses. Sounds intriguing? So was this story. I liked it a lot.

Drunken Fireworks: This story was interesting in the sense that it's literally about a fireworks arms race (ooh! Aah!) but (BUT) it's also mainly descriptions of various fireworks which are reallllly more of a visual thing. It was fine though, and all good, clean, upsetting fun.

Summer Thunder: The perfect story to end the collection with (yes, it's nearly the end, I'm sorry), Summer Thunder is maybe the only end of the world short story I've ever read, and it's so damn wholesome. A man and his dog and his one remaining friend. It's ordinary life, but without anyone else to live it with. It's sad and moving and also just really good short story telling.

Thus concludeth this review. I am so sorry it was the longest thing ever, I'd forgotten how many stories there actually were in the thing (along with everything else about it, obviously!) I've said it before,  and I'll say it again- I really love King as a short story writer. He can get so bloated and losing the plot-ish with some of his longer works, but his short stories really just sustain an idea for a short amount of time and they're so TIGHT. As of now, I have no new King short stories to read, and doesn't it break your heart for me? It should!
Posted by Laura at 09:52