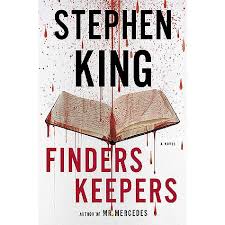 Finders Keepers is the second in King's three part detective trilogy, starring the lovable retired cop Bill Hodges and his team of intrepid detectives. I say this BUT possibly the thing I loved best about this book was that it kind of wasn't about Hodges and his team, who pretty much took a backseat in the story, and let other events have their say. And SUCH events they are!

But let me back up a few hundred yards. So. At the end of Mr Mercedes, the first book in the trilogy, we leave everything where it is (vagaries so that we avoid spoilers... Although I don't know how I'm going to do that for End of Watch...) and Finders Keepers starts with a whole new story, and a whole new crime. A well respected author gets robbed, and in the process, his smart mouth ends up getting him murdered. The murderer ends up hiding the money and notebooks stolen from the author (his favourite, as it turns out) and in a series of unfortunate events ends up in jail and unable to retrieve them. Abouuuut 30 years later, a teenage boy finds them, who just happens to be the son of one of the people injured in the Mr Mercedes massacre of the first book. He uses the money to help his floundering family, and falls in love with the notebooks which contain two unpublished novels by the aforementioned murdered author.

It's probably clear that this doesn't go so well for the boy when the thief (and, lest we forget, murderer) is released from jail and everything gets very tense and thrilling, just like in Mr Mercedes. So, from the tenuous link of son-of-victim-of-massacre, we actually get a really great story- it's not just that it's tense and thrilling, it's also that it is very much its own story- it doesn't need the previous book to exist, but the fact that the connections are there make it that much more compelling. Hodges and his team don't come into it until about a third of the way through the book, and even when they do, it very much takes a backseat to the events of the main plot, and I really love that about the book. I also enjoy the little things- that Finders Keepers refers not only to the detective agency set up by Hodges and Holly since the end of the last book, but also that it refers to the attitude of the boy to finding all of these riches in a wood.

I think maybe what I loved best about the book is the way it signals to the love of books. For both the boy and the thief (is it clear by now that I can't remember their names..?), the main thing that motivates them isn't the money (although it's handy) it's the notebooks- not because they're technically worth more than money, but because they have a deep love for this writer and his works. Just imagining finding a couple of new Steinbeck novels, for example, sets my heart aflutter, so I get it. I totally get it. And also UGH it's just so good.

Finders Keepers DOES have some connections to the previous book, and having read End of Watch before writing this review, I can confirm that it also has connections to the final book in the trilogy, too. It is, in fact, the perfect bridging book, in that it doesn't let you forget the overriding story and main driving force of the trilogy,  but it also tells its own story without being overshadowed. Having read all three, I can't at all decide on my favourite, but this one may well be it.
Posted by Laura at 08:00