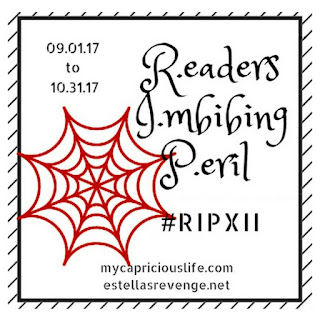 As I think we should all be aware by now, RIP is my very most favourite reading event of the year. It's about the only one I participate in any more too, so that's a thing, but seriously, I can't even imagine an autumn now without reading books that make my heart race and make me want to hide under the covers. It's being hosted by Andi and Heather this year and I belieeeeeve you can sign up on either blog.

I will be going for Peril The First (as always) which is reading 4 books that are thriller/mystery/crime/horror-y. FULL DISCLOSURE: As it is the 9th day of RIP already (I am so late, I realise, but hey I only just got internet, leave me alone) I have already read two books that fulfil the requirements for this challenge, so who knows, I may have read 44 by the end of October (loljk I can't read that many books cause I have a job).

I am so into this challenge that I made a pile of books, carefully selected from the crates of books still sitting in my new flat (bookcases are arriving imminently) and took a photo even though I knew I wouldn't have internet for daysssss. This is the face of true dedication to feeling a bit scared. Look, books! 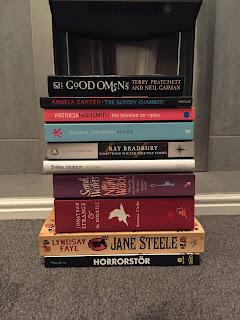 Good Omens by Terry Pratchett and Neil Gaiman
Other than The Sandman and Coraline, I still haven't managed to finish a Gaiman book, and I haven't even picked up a Pratchett one (I know, I know, I must be stoned to death). Maybe a combination of the two will kickstart me into reading their entire back catalogues. Maybe.

The Bloody Chamber by Angela Carter
I started this a looooong time ago and never finished it. It might be time to restart it and actually finish the bloody thing this time. Honestly, me.

The Talented Mr Ripley by Patricia Highsmith
I have already read this (9 days!) and it is amaaaaazing. I loved it so much and the only reason I didn't read it in like a day was because I physically couldn't stay awake for that long (old age). I shall review most soonest. (ALSO: I have had this book on my pile almost every year since I started the RIP challenge 6 years ago [!] It feels goooood to have finally read it)

Amrita by Banana Yoshimoto
I always need more Yoshimoto in my life and whilst I know basically nothing about this book, it says something about mystery in the blurb so there you go.

Something Wicked This Way Comes by Ray Bradbury
Bradbury! Shakespeare! Many exclamations to cover for the fact I don't know much about this book but it's gotta be good!

Dark Tales by Shirley Jackson
Apart from Stephen King, Shirley is my GIRL for bringing the shocks and deep deep feelings of uneasiness. All over this.

The Night Watch by Sarah Waters
I also have no idea what this is about but there's bound to be lesbians. I thought it was the ghost one but Wikipedia tells me no, so... let us see!

Jonathan Strange and Mr Norrell by Susanna Clarke
I have had this book for SO LONG that I really just have to read it to get it the hell away from me. Or... In less harsh words, let's see if it's any good and go from there! It's so big thoughhhh...

Horrorstor by Grady Hendrix
It's that horror story set in Ikea and in the style of an Ikea catalogue that I think everyone's already read. My turn!

That's my pile! I also, in an attempt to treat digital books like real books, need to finish The Fireman by Joe Hill and American Gods (also Gaiman) which are trapped, sadly ignored, in my iPad, and I have the strongest urge to reread It but don't really want to do it while I'm living alone for many evenings (it's complex, I'll tell you about it some time). I also haven't really been through ALL my books, so there are probably many more candidates hidden away that I'll find when I unpack them properly. It's all really quite exciting, to be honest.