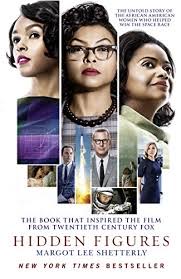 I went to see Hidden Figures when it came out last year, because I'm not stupid, and I was charmed by how dramatic they made maths (I love maths) and, of course, pleased that the stories we never get to hear, those of black women, were finally being told. As soon as I realised it was a book I wanted to read it, because did I want more dramatic maths in my life? Of course I did!

Unsurprisingly, the books has way less drama, but in many ways it's more interesting than the film. It reflects their actual lives in ways the film does not always, and makes it clear that their work lives at NASA were just that, work, and not their whole lives. There is also a lot less bothering with white people in the book, which is absolutely a plus- the movie has Kevin Costner being all annoyed with separate bathrooms, and Kirsten Dunst being a bitch, whereas the book has no mention of anything like this which makes me side-eye pretty hard at the movie, if I'm honest.

Hidden Figures, rather, combines and intersects the lives of black women working at NASA at a time where, just outside the Virginian HQ of the organisation, they weren't seen as fit to mix with white people. Their children weren't allowed to go to the same schools as the white children, they weren't allowed to sit with the white people on buses, you get the idea. This book is really great at pointing out the discrepancy, and as it has a wider range than the movie, it also takes a look at, for example, black men starting work as engineers at NASA and being fucked with by prejudiced white men, something which the women, being somewhat below the contempt of the (white) men, didn't have to deal with. They were disadvantaged in other ways, of course, but it was interesting to see an extra level of horrible things that people had to deal with because of, you know, something as obviously integral and important as skin colour (eye roll to death).

These women, though. Damn. So much smarter than I could hope to be, and amazing at maths, it's both uplifting to realise that they got to be a part of space travel (and, before that, developing planes) and depressing to realise that, for all that they achieved, there were probably millions of bright and talented girls who just didn't get the chance to use their intellects in such a way. For that matter, there are women who worked for NASA who still didn't get to achieve their full potential, by being excluded from being engineers and by never being acknowledged in reports, even though they did a lot of important calculations to make sure that things worked. If you really think about it, the fact that these women are only acknowledged now, 50 years after their work, says a lot and makes Hidden Figures really the perfect title for the book. I'm glad we have Lee Shetterly to show them to us.

On the whole though, this book is quite uplifting because yay excellent women achieving things! If it made me angry, it also made me happy because look at all the amazing things women can do, and just imagine what else we could do. I'll bet it's a lot.
Posted by Laura at 08:30