30 Books Before 30: #5 The Hitchhiker's Guide to the Galaxy by Douglas Adams 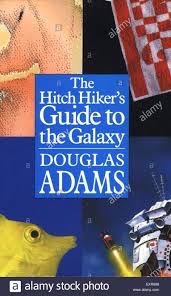 The Hitchhiker's Guide to the Galaxy is probably the book that I have been told to read the most, and that shocks people the most when I tell them I haven't read it. The marvellous Bex bought it for me ages and ages ago now during some kind of bookswap event thing, and still I did not read it, I think because other things always jumped out at me more. And like, AS IF I even like sci-fi, you know?

I do like sci-fi, but even if I didn't, it wouldn't really matter because The Hitchhiker's Guide to the Galaxy isn't really a sci-fi book. I mean, obviously it is, there are aliens and spaceships and all of that good stuff, but what it really is is a comedy book. I mean, everyone probably already knows this because everyone has read this book, but it is so funny - the observations about people and Earth and, well, everything, are just so spot on and funny, and I feel like a part of the pop culture sphere that was previously a mystery to me now makes complete sense.

Like towels! I know what towel day is, and how important towels are now! I know that the meaning of life is 42, whatever that means! I finally know what this book is about and it is kind of nonsense, but it is the best possible kind of nonsense, and completely and fully entertaining. I mean, nice work having good taste, everyone I know, because this book is pretty special and hilarious and just yes, very good.

Also, very British, have I mentioned that? Arthur Dent, the main, well, earthling, is incredibly, quintessentially British and baffled throughout, which just makes everything that much sweeter for me personally because Arthur I know you! You are basically everyone I know in this country! The humour, too, is very British in its nonsense, and silliness and just generally taking the piss, and I am genuinely interested in non-British readers and how they find this book - did you love it because you have an excellent sense of humour, or did you wonder what the f was happening? There are no wrong answers!

I realise I have written all this and not really said anything useful, but it's mainly because I feel as though everyone has read this already and ALSO because I read it ages ago now and AS IF I can remember any details about it. I also have another question: do we read the sequels? How do we all feel about them? Are they things we read or do we just nod about their existence and then move on with our lives? All I know is that the first book is very good, and thank goodness I've finally read it!