30 Books Before 30: #7 The Handmaid's Tale by Margaret Atwood 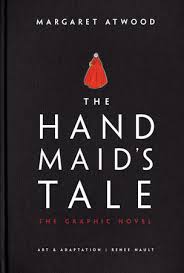 I have already read and reviewed this for the blog before (see! It's right here) so I don't really want to write a regular review of it because, see previous review and same. This reading was interesting in that it was the first time I'd read the book since watching the TV show, and so naturally my brain went into overdrive comparing and contrasting the two.

What I was most impressed about when considering this was just how right the TV show feels when held up next to the book. The book and TV show part ways narratively after season one, where Offred is, just like at the end of the book, taken away in a mysterious van. Season two decides, kind of depressingly, that this van does not take her to salvation but to more of Gileadean hell, but what amazes me when reading the book is just how correct this hell feels with relation to the book narrative. It's like the TV show takes the original story and runs with it, opening up the world that Atwood created and showing a much wider view of it than we're able to see from Offred's limited eyes in the novel.

I JUST REALLY LIKE THE TV SHOW OK?! (Not so sure about Atwood's sequel but I'm reserving judgement on it until I can actually read it for myself)

With the books on this 30 Before 30 list that I've already read, I'm aiming to look at why I think they were included on the list in the first place. The list itself is pretty opaque on its reasoning other than, like, 'this book is good' so I'm happy to make my own guesses on this. The Handmaid's Tale has, with women's rights under threat from every direction and a literal crazy (white man) sitting in the White House, become more and more relevant as the world gets scarier and more uncertain. I guess reading it as an under 30 makes it clearer just how much its events would affect the young - women would be eligible to be monthly, government mandated rape victims, men could be suppressed in their natural urges, or, more likely, dead - and just how quickly these things can take place.

I doubt this book was included in the list because we're under any real threat of its events unfolding, but more because, even a less extreme version of The Handmaid's Tale society is too much. As is the case with almost everything, this is the kind of book that needs to be read by people who won't do so, but if it alters the perceptions of even a few people then I think it's done a pretty good job. This time round of reading, I was terrified as ever, but with thanks also to the TV show, it really really hit home to me that in this society, I would not be allowed to read. And what would be the point of living, in a society like that? Exactly.

In short, I was glad to have the opportunity to read this book again (as if I need a reason) and, you know, I think it's a pretty important one for everyone to read before they're 30. I'm going to allow it to stay on the list (cause I have a say in that) and it hopefully goes without saying that I think you should read it too, young reader.
Posted by Laura at 21:39