30 Books Before 30: #6 When Breath Becomes Air by Paul Kalanithi 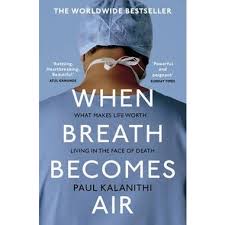 You guys. This book. I'm going to try to not be ridiculous and gushing about it and talk about it sensibly but the second I finished it, in one morning I might add, I deleted the facebook and instagram apps from my phone so believe me, it's had an impact on my life.* Let's see how I got there.

Paul Kalanithi was a neurosurgeon and neuroscientist, a father and a husband, and a really very good writer. He died aged 37 of lung cancer, and left behind this complete jewel of a memoir - written while he was sick and edited and completed after his death by his wife. It's incredibly moving, not only because you know that this is what he spent the last year or so of his life completing, but because his meditations on life and death are incredible and thoughtful and, through getting to know him through this book, you feel his loss so deeply at the end that you honestly feel as though you've lost a dear friend.

The first half of this book takes you through the majority of Kalanithi's life, before his cancer diagnosis, and my GOD the man was interesting. Far from being certain of being a doctor, Kalanithi took two degrees in English Literature, got a masters in History and Philosophy of Science and Medicine, and then chose to go to medical school and rather than getting a PhD in English Literature, his other path. Kalanithi, then, was a person with so many paths open to him, and could have been accomplished in so many areas, but chose medicine. I'm a little bit in awe of him, in case you couldn't tell.

The second part of the book, then, takes place after Kalanithi's diagnosis. It actually became pretty hard to read at this point, because dammit I liked the guy and, you know what, I didn't want him to die even though I knew both that this is a memoir, and that it was published post humorously. Kalanithi's approach to his illness left me as much in awe of him as his academic achievements - he kept going, as much as he could, he carried on being a neurosurgeon, he kept on living, even when he was dying. He lived as fully as he could for as long as he could, looking at amazing job opportunities that he didn't know if he'd be alive to take, but, as he puts it - no one knows if they will be. For him, the problem with knowing his time was limited was in not knowing exactly how limited it was - if he had 10 years, he'd go into neuroscience, one year, he'd write a book, but as he acknowledges - no one ever really knows how much time they have left.

Which brings us to me, really. His wife has an afterword in this book that I basically cried throughout, but her words of love and awe for her husband are really the perfect end to this book. Somewhere in there, she talks about how he lived each day to the full as much as he was able to, both before and after diagnosis, and that hit me really deeply because how much have I ever lived each day to the full? Basically never. This is not to say that I'm now going to become a neurosurgeon (I don't think that's my life path) or even that I'm necessarily going to become anything much at all, but it does mean that I decided that I want to live more purposefully, or even just be more present, which for me has meant taking my eyes away from my phone screen a lot more, even if it's just to be looking at a book instead - it's still something.

I don't really know if this review got across how much this book truly affected me, but I honestly can't think of another time that a book has made me DO SOMETHING in real life in such a way. I got this book from the library because of poverty, but I know that it's one I'm going to need to keep around me, for when I need the strength and dignity of a wonderful person to inspire and comfort me. It's not nearly enough of a consolation for him dying so ridiculously young, but I think it's still something, to keep affecting people in such a way, even after he's gone.

*That may not sound like a big deal, but honestly I had been spending a butt ton of time on them that could and should have been spent on just better things so yes. Impact.
Posted by Laura at 09:00