Devouring Books: The Perks of Being a Wallflower by Stephen Chbosky 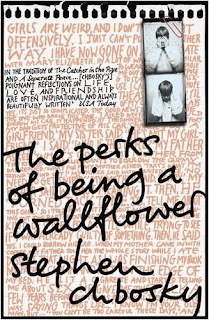 Wow. I haven't felt quite the way I do about this book for an extremely long time, perhaps even since I read The Bell Jar, at a very impressionable age so that it has reverberated around my head ever since. I think The Perks of Being a Wallflower is going to do much the same.

The recommendation on the front of my copy of the book compares it to The Catcher in the Rye. This made me a little apprehensive, because I am definitely not Holden's biggest fan, but I needn't have worried. I felt so much closer to Charlie, Perks' protagonist, and could definitely identify with a lot of the things that he said, definitely in a better way than I can with Holden. I think there are many reasons for this, especially generational ones (I relate better to a Generation X sense of not belonging than to a 1950s one), but also that Charlie is just so passive and shy that I can see a lot of myself in him. I'm not trying to confess a mental illness to you or anything like that, but lets just say I can understand a lot of the things that Charlie says, and a lot of the sadness that he feels.

Mostly, though, I just love the little things about this book. The way that Charlie regards every new book he reads as his favourite book, something which I can't say I've never done; the way he feels music with all his senses and it really means something to him, rather than it just being background noise around him. The way he is never quite in sync with everyone else, but that's somehow ok because there are people who will accept him. I also love that, his mark of a great film is one that makes you feel different in some way after you've seen it- something which I'd never really considered before, but makes so much sense to me that I want to tell everyone about it, all the time.

There is so much about the book that I love that I can't even express because it is more about the way it made me feel rather than anything about the actual story. I could barely feel time passing as I read this book, and two train journeys passed by in seconds. If I'd been at home, I know I wouldn't have been able to move for the entire duration of the book. That's how good, but what is so good about it is pretty indescribable- I think you either have to feel it or you don't, and I definitely did.

I'm going to try and talk about it in a more rational way now, without sounding like a floaty hippy (which I do happen to be, but never mind that!) Apart from our narrator, who is so lovely, and yet so distanced, there is a supporting cast of characters that are almost equally as damaged as Charlie, but just in completely different ways. There is Sam, who he is in love with, but who doesn't feel she can love him back; Patrick, a gay senior who has had to put up with a closeted boyfriend (making this book part of my GLBT fiction challenge, oh yes!) and who goes off the rails slightly in the book; his sister who is having boyfriend trouble; and just so many more characters, none of whom are precisely happy or precisely sad- they just do the best they can, and this is perhaps no truer of anyone than it is of Charlie.

There is just so much in this relatively short book that I wouldn't want to give away too much about it, or take away the opportunity to discover your own favourite things about it. Just believe me when I tell you it is completely wonderful, and that I have probably never wanted to have written a book more than I do this one. I'll just give you one example of something that struck me really deeply, right in the heart. When all of Charlie's friends are getting ready to leave for college, he tells us this: "nobody felt sad as long as we could postpone tomorrow with more nostalgia." Isn't this just what people do? We avoid thinking or talking about future things that scare us, for the sake of past things that made us feel so good, because it's easier than admitting just how scared we are. I know that I do this all the time, and whilst it's not necessarily the healthiest thing to do, it is necessary so that we don't all go completely mad. At least, that's what I think, whereas someone else might have far different feelings about it, which is one of the greatest things about reading anything, but especially this book.

So, this book has just about gone to the top of my list of things people are never allowed to say bad things about ever (just above American Beauty and To Kill A Mockingbird). So, please think carefully before you comment and tell me what you thought about the book! (I am kidding, because I really don't think there's much anyone could say that could make me love this book less. Just sayin'.)
Posted by Laura at 17:15