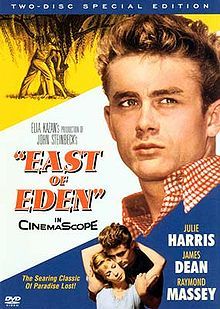 (Photo Via Wikipedia)
I had about the lowest hopes one could have for a film for this, having re-read and adored the book just a couple of weeks before. I guess, therefore, it was inevitable that I was going to enjoy the film regardless of what it was like, because I had such low expectations for it. I was, however, pleasantly surprised at just how much I enjoyed the film, despite the fact that it left out basically two thirds of the book (including all the stuff with Steinbeck's actual family).

The thing is, while I wouldn't have the book without its beginning, in the film it somehow works. All the pertinent pieces of information- Cathy's evilness, Adam's dependence on and love of her, and even a little glimpse at the Hamiltons previous activities are all there, and then the film is able to tell what is essentially Cal's (James Dean) story- how inadequate he feels compared to his brother, and how much he wants his father to love and accept him. I'm not going to lie, having James Dean starring in this film was a big draw for me- he is just so damn attractive that I can hardly stand it, but more than that, he really was a great actor- you can really feel Cal's emotions just radiating off the screen, and you want so badly to tell him that he is worth a lot.

One thing that this film can't really claim is subtlety. I watched the first bit with my sister, who hasn't read the book and was only half watching it, and one of the only comments she made was "Is that his [Cal's] brother's girlfriend? They're going to end up together." Yep, that's how obvious. I wasn't exactly impressed by Julie Harris, who played Abra, but she did make it pretty obvious that Cal was the one that she wanted (ooh ooh ooh!) And who can blame the girl. Even when he's not James Dean, Cal is so loveable by the virtue of not thinking that he is- you want to hold him and tell him that it's ok because you will always love him, no matter what. Or maybe that's just me!

One thing that I thought the film would struggle with was the loss of Lee, and it did to a certain extent, but covered it up with something kind of ingenious. Whereas Cal borrows the money for the beans from Lee in the book, in the film he goes to his mother (who he isn't supposed to know about) and gets it from her instead. This adds an interesting dimension to the film, and makes Cathy seem a lot less evil than the book does, and it is also the device through which Cal is able to learn more about what happened when he was a baby, something which we see firsthand through the book. The thing about Lee is, that while I genuinely wouldn't have the book any other way, his role is sort of as a philosopher and thinker throughout the book, which is something that doesn't necessarily translate very well to film. And especially not to a film where James Dean fights a bit and just generally acts like a teenager, which he does so well!

So, the film is generally pretty faithful to the part of the book that it chooses to focus on, and I really did genuinely enjoy it. If I could only recommend one of these, then it would unquestionably be the book, but fortunately I don't have to decide between them or anything like that- so get your teeth into them both! If you've seen the film and read the book, I'd love to know what you think about the differences between them- maybe they should have had some flashbacks to some of the more dramatic parts of Adam's earlier life? Let me know what you think! 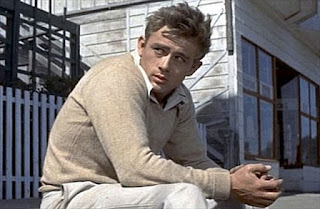 Update: One critic in 1955 apparently said that James Dean's performance was like a "mass of histrionic gingerbread", which I think sounds hilarious, even though I'm not quite sure what it means! He's one hot lump of gingerbread is all I can say!
Posted by Laura at 17:18