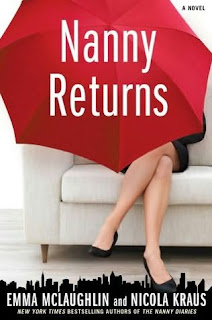 I can't even tell you how much I loved The Nanny Diaries (also by the two authors), and I have probably read it a bazillion times at this point (ok, so like 10 or something? Quite a lot, anyway.) Most of what I loved about the book was Nan, the main character (inventive name for a nanny, right? In another book of theirs, the characters are called Girl, Guy, and Buster. Weird.) and her sanity in the face of utter madness, the way she managed to keep her cool (most of the time) and her unnerving confidence in herself. That's at least the way I saw her, and at 21 I thought that she pretty much had it together, and knew what was important in life.

12 years later, I expected this confidence and self-belief to have grown to a level that made Nan someone to really look up to, an inspirational figure for living ones life, a touchstone of sanity in a New York where the ultra rich are crumbling and falling apart (it's set in 2008, in the midst of the financial crisis). This is not exactly what I got. Nan seems to have much less confidence in herself, unable to express her thoughts to people that really need to hear them, and the things she lets slide annoy the crap out of me. She constantly goes on (in the narrative) about how much she is not a part of the whole Upper-East side thing that exists in New York, and yet she makes decisions that put her right in the middle of it- making friends with her dreadful old schoolmates, working for a ridiculous private school (and I really mean ridiculous- they care a lot more about their reputation than the welfare of their overindulged, and yet emotionally neglected students), and just generally hanging around with the people she hates. And then complaining about it. I guess this is more for the story than anything- if there's no one for Nan to criticise, then what else can they have her do?- but to be honest, I would have preferred to see her in Africa, or Sweden, where, it is made clear, she has been for the past 12 years.

One particular story arc that really really irritated me was the one where Nan's absolutely perfect husband (he's barely sketched as a character at all, except as 'a perfect husband') wants them to have a baby, and she freaks out. This is the girl who used to work with children for a living, who in this book mothers two boys more than they have been in their entire lives, and yet she doesn't want children because she doesn't want to take responsibility for how they turn out. This is literally a storyline that spans the entire (and I really mean entire) book, resolved only in the last pages, when I could have resolved it for her in about 3 seconds. Nan, listen up- the best you can do with children is your best, and it's pretty bigheaded to take all the credit for how they turn out- there are so many other influences on children that you can't control, and you just have to go along for the ride and love them as best you can. And I'm not even a mother! Why on earth she thought that she would be some kind of crazy non-working upper-East side mother is beyond me, seriously. SO ANNOYING!

And then there were things that were intended to add tension and did nothing of the sort. There's one particular part of the story featuring possibly my least character in the book (and that's saying something, especially because I didn't even like Nan that much in this book), where it seems absolutely clear to me that she is lying, but this idea doesn't even cross Nan's mind. I mean, duh! I don't know why I bothered to keep that cryptic for you since you're unlikely to read this book from this review, but, you know, I try to be considerate! So that was a bit of extra annoyance, since Nan chose to trust the one person that it seems clear to me she really shouldn't be trusting, or be anywhere near at all, based on previous experience.

And she doesn't even work with kids anymore! This book is set up so that the end of the last book is essentially the most traumatic thing that's ever happened to her, and is a stronger influence on her current decision making process than anything else that's happened in her life. Excuse me if I don't entirely buy this- the girl has lived in Africa, and she still thinks that the worst thing ever is some emotional neglect of a rich kid in New York City? Excuse me if I don't exactly buy that, but this is the Nan that the authors have chosen to portray, and this is the one we have to live with.

Can I say anything nice about this book at all? Well, it's definitely easy to read if that's something you look for- I read it in about a day, grrr-ing to myself throughout, and, on the plus side, you definitely can't tell that two people have written it rather than one- it all hangs together pretty easily. The fact that two people thought that this story was a good idea is a little scary, but other than that it's fine! Why they couldn't have given me a Nan that speaks out about the injustices she sees is beyond me, but I suppose her years at Chapin taught her how to be a good subservient girl. Excuse me while I banish this book to the island of sequels that never happened, nestled right next to the two Sex and the City movies. To be honest, I would rather have read the first book again than have read this one. But what's done is done, I suppose.
Posted by Laura at 20:31