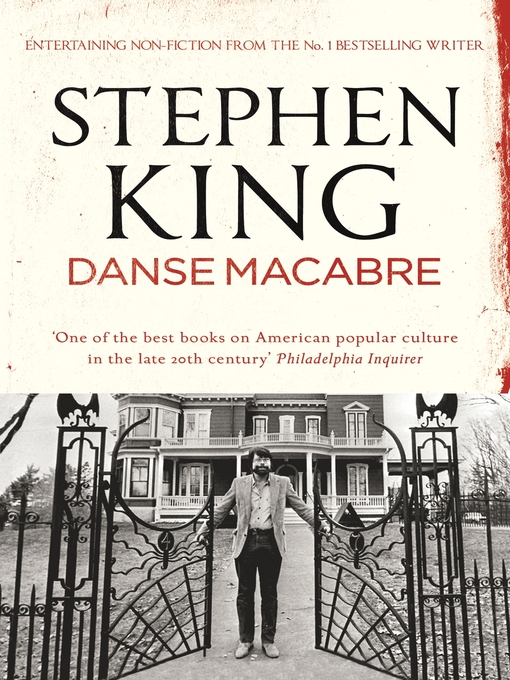 I'm possibly not the best person to be reviewing this book because (and please don't tell anyone this) but I'm not really an expert on horror, and this is a book all about the horror genre. I know what you're thinking: 'Why the hell has she been reading all these Stephen King books if she's no expert on horror?' And I'm not ashamed to say that basically all my experience in the horror genre has been in Stephen King specific territory. I can't give you any specific reason for this, other than the fact that I really like his writing style, something which is here even in this non-fiction book, and frankly I can't imagine that anyone does it better.

Stephen King disagrees with me, and he's not afraid to tell you that. Danse Macabre is basically a study of the horror genre, over film, tv, radio, and finally books; from about the 50s to 1981, when the book was first published. It's extensive, detailed, wonderfully written (of course) but there were points where I have to admit, I skimmed a bit. This has nothing to do with the writing (again, it's Stephen King, it was pretty good) but as someone who has seen basically none of the films, nor read hardly any of the books he was talking about, it was pretty difficult to stay focused on the subject at all times. There are definitely people who would get more out of this book than me though, and I'd say that as a short history of the horror genre, it's probably the best you're going to find, from someone who, it is clear, is a genuine fan.

King makes a lot of reference in the book to English students and Professors who attribute a lot of meaning and context to books where it isn't really there, and essentially for demystifying the books entirely. This is what he somehow manages to avoid here- I described the book to my friend as 'like those awful essays we used to have to read for English seminars only much more fun' and they really are- King manages to make interesting points about each text (and that includes movies too, remember) without sucking the fun out of them, and, importantly, without taking them too seriously. He also makes hilarious asides- there was something amazing about Republicans that I can't find now, but I assure you it was brilliant.

Most interesting about this book for me, were the influences I could see from the works that King was talking about into his own work. There are parallels between a lot of the books he talks about and his own (some of which he points out and some of which he can't, having not written them by the time this was published) and so at its best points, it allows some insight into the ways that King is able to take from other works, and create new monsters and new horrors to scare the crap out of his readers. For example, he mentions, for some reason, his admiration of the phrase 'He thrusts his fists against the post and still insists he sees the ghosts', something which later becomes an integral part of It.

And then, there is this excellent little rant:

"...that awful, dreadful goblin of a reader, he or she WHO TURNS TO THE LAST THREE PAGES TO SEE HOW IT CAME OUT.
Do you do this nasty, unworthy trick? Yes, you! I'm talking to you! Don't slink away and grin into your hand! Own up to it! Have you ever stood in a bookshop, glanced furtively around, and turned to the back of an Agatha Christie to see who did it and how? Have you ever turned to the end of a horror novel to see if the hero made it out of the darkness and into the light? If you have ever done this, I have three simple words which I feel it is my duty to convey: SHAME ON YOU! It is low to mark your place in a book by folding down the corner of the page where you left off, TURNING TO THE END TO SEE HOW IT CAME OUT is even lower. If you have this habit, I urge you to break it... break it at once!"

You know how I found that quote again? I folded down the corner of the page it was on... I'm so bad! But, you know, not as bad as the read-the-end-first people, who, like King, I can't really understand. Naughty.

So, basically, I enjoyed Danse Macabre as much as I possibly could, and even gleaned a few book recommendations from it that I fully intend to look into- The Haunting of Hill House, for one, sounds really really interesting. If you're an avid horror fan, of more than one author and of movies as well as books, then you will probably adore this book. Just watch out for spoilers, since King sometimes gives away entire plots to movies in order to discuss them properly. Fine for me since I don't really intend to watch them anyway (I can't take visual images that could come back to haunt me at about 4 am) but if you're not quite where you want to be with your horror movie repertoire, I'd just be a bit careful around the movie chapters. Other than that though, go wild! You certainly won't regret reading this comprehensive study of the horror genre.
Posted by Laura at 14:33