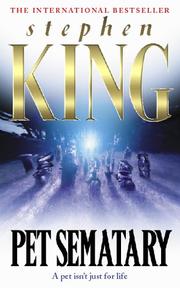 It felt so so good during the Readathon to break my Stephen King celibacy (is that an appropriate word to use when you're talking about books?! Possibly not...) and reading Pet Semetary in about 5 and a half hours or so was definitely the best way I could think of to spend an afternoon. This being a new Stephen King for me, and one severely warned against by a friend, I was apprehensive and excited to see what horrors lay ahead. And, oh boy, were there some horrors!

Interestingly, though, reading it in one setting made me extremely aware of the delicate balance in King's books, of, obviously, a certain level of horror, but also, much more importantly, the laying of the foundations that allows the horror elements to transpire. Once you've finished reading, you of course remember the parts that scared you the best, but I think it's also important to remember just how well crafted they are too, and how important all the stuff that comes before is to the success of the horror. Pet Semetary is a book where the horrible parts are indeed horrifying, but they would be far less so if they hadn't been so well explained, and if there hadn't been such an excellent sense of foreboding set up pretty much through the entire book.

What I found the most interesting and poignant about the book is the differing ways it deals with talking about and dealing with death. Before all the horrible zombie stuff happens (that's not a spoiler right? Well, if it is, there are zombies, but I'm not going to tell you who/how so there), there are reasons to discuss death, and our protagonist, Louis, being a doctor and all, has an extremely healthy attitude towards death- that it's a natural part of life that everyone has to go through, and you might as well know about it because there's no point in being scared of the inevitable. His wife has a rather different attitude after the grisly death of her sister when she was 8, and so the two conflict over the best way to deal with death with their daughter, Ellie. Then, later, the issue is more dealing with grief, and trying to learn to let go of the person who's died, because there's no way to get them back, no matter how much you want to believe there is. It's a heartbreaking fact that one of the characters (see what I did there?) simply refuses to accept, and from there, there's some creepy mojo going down.

One distinctive thing about this book for me was that the main character was a doctor, rather than a teacher or a writer. I can't actually think of another Stephen King book right now where one of the main characters wasn't a teacher or a writer, so this is actually a huge deal! It's interesting too, because it allows King to ruminate on how a doctor would see the world, and what this means is that supernatural things that happen to him are disregarded on the basis that they are impossible- he convinces himself, for instance, that he's in a dream whilst he's clearly following around a ghost, and it's pretty funny listening to him say 'wow, this certainly feels real, but because it's scientifically impossible it's not actually happening' (ok, he doesn't actually say that. But that's the gist of it!) Another rarity about this book is that there is nothing really supernatural about this family- they have no 'good' (like Danny's telepathy in The Shining, for example) to balance out the bad things that are going to happen, and if I tell you that the ending is really pretty bleak for a Stephen King book would you hurt me? I hope not cause I just did!

Basically, you're going to want to read Pet Semetary. Probably tonight. Probably without stopping. Pay attention to its nuances and get really really terrified- just hope that, when those trick or treaters knock on your door that it really is trick or treaters, and not something much, much worse...

Note: Not to devalue my creepy ending or anything, but just a quick note on the title- it really annoyed me for a long time, but actually, it's from a sign made by children for the cemetery where they bury their pets (obviously...) so I think we kind of have to forgive them. Unless you're not the forgiving type, in which case, don't worry about it! Also, I nearly spelt cemetery wrong myself... Duh!
Posted by Laura at 15:54