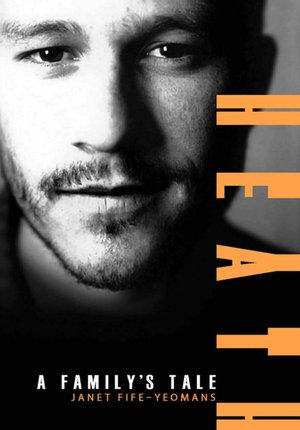 I've had this book for quite a long time, and yet I was always apprehensive to read it because, well, firstly I loved Heath Ledger and I was (and still am!) so sad about his early death; but also because it was published in 2008, which fact fans will know was also the year in which he died. Now I don't like to judge books too harshly without reading them, but I couldn't help but think that this was just going to be a biography that was cashing in on Heath's death, and possibly even putting forward loads of juicy claims about him in order to move copies.

On this front, I was pleasantly surprised. Even though the book begins, predictably, with his death; on the whole it celebrates his life rather than glorifies his death, and stays pretty much with the provable facts rather than conjecturing about exactly what Heath was feeling or doing around this time (unlike a Kurt Cobain autobiography, Heavier than Heaven, which relates the days and minutes leading up to his death in almost first person detail, which seriously pissed me off because, hello, you weren't there!) which was probably a wise decision considering that, in 2008, we mostly weren't even sure if his death was accidental or not. There is one chapter at the end that deals with the aftermath of his death (funerals, blessings, 'whether or not he was going to win an Oscar'- which is why you shouldn't write a book right away!) but that also remained respectful and kept almost an honourable distance from all of the events; reminding us that, however much the world missed Heath, his family still miss him a whole lot more.

So, rather than being all about the death, this book really just celebrates the life and (mostly) work of Heath Ledger. Starting with his earliest roles and working its way to the last one, Yeomans describes some particulars about the makings of his films, their critical reception, and Heath's (public) reactions to that. She also takes us through his relationships, again using quotes that the couples of the time gave themselves, and there is, of course, a professional amount of distance between them and the reader. I guess this would annoy some people- who would want to know, I don't know, where they ate, and what they did, and exactly how they felt about each other; but I would feel much worse about this book if Yeomans had had the audacity to assume at any point that she had the right to speak for Ledger. She does, of course, conjecture about what he might have been feeling, based on the evidence of interviews and stuff, but it's mostly left up to us to decide how we feel about him ourselves.

If I'm completely honest, there wasn't too much that was new to me in this book. Less Ledger-inclined people (i.e. people who haven't read his IMDb bio) might not have known that he and his sister were named after Heathcliff and Cathy from Wuthering Heights (which, by the way, I find disturbing- not that his mother chose the names for that reason because, you know, that's AWESOME, but because they're brother and sister! Heathcliff and Cathy had a very disturbing and undying love that was in no way fraternal... *shudder*) but on the whole it was mainly 'he made this film' and 'he went out with Naomi Watts' and 'Annie Proulx totally thought he was wronged when he didn't win the Oscar for Brokeback Mountain' (didn't we all?!) so in that respect it wasn't massively informative, but still interesting to have all of that information in one place!

About the only thing that was news to me was about the only thing that I had a problem with in the whole book. There's this whole thing about how Heath was from a totally tight-knit family, but that, after his parents divorced and his father moved in with Heath's great-grandfather, there was a whole scandal about his father kind of stealing from his great-grandfather (in a really roundabout way involving re-mortgaging and stuff), and that, when the rest of the family found out, they took him to court about it and basically everyone, including the dad's brothers who he was really close to, sided against Heath's dad. Now, as far as I could tell from the acknowledgements, the only family members Yeomans could get to talk to her were Heath's dad's brothers, and this is why she had all this information and thought it was necessary to include it in her book. I disagree entirely- the whole affair was completely irrelevant to Ledger's life, really, and it sort of seemed like she just wanted to include some 'scandal' to try and get her book more attention. The whole crux of including this seemed to be so she could point out that Heath's uncles and cousins weren't invited to his funeral, but that seemed irrelevant considering that he hadn't seen them for the majority of his life. It felt like kind of a low shot, and I frowned disapprovingly at this whole portion of the book.

So, I wouldn't say don't read this book, but unless you're really non-well informed about Heath Ledger and his films, there's not going to be all that much you can learn from it. If you do read it, I give you permission to skip most of the stuff about his early life, because, actually it's not at all about him, and all about his dad who, let's face it, we're not all that interested in, right? And if you need something to make you cry afterwards (because this book really didn't do that for me, which is a good/bad thing depending on what you use books for, catharsis-wise) then try this video: