Devouring Films: LA Without A Map 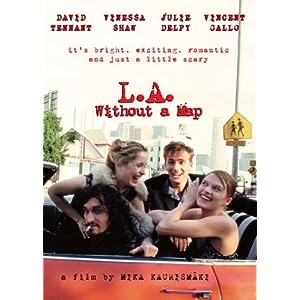 For some reason, mainly because it's really difficult to get hold of this film, I kind of thought it would be crappy. I wanted to watch it because Johnny Depp has a fleeting role in it, and, well, I want to see all his films because I adore him, and I'm not only talking about his face. I should have known, anyway, that the more elusive the film, the better it was bound to be, and LA Without A Map really was great! I obviously shouldn't have been surprised by this- it stars David Tennant and we all know that he's awesome, plus it has that woman who was the 12 year old love interest in Hocus Pocus, and really, what else do you need to know about it?

Oh, actual information and stuff? Right. Well, the movie basically follows Richard (Tennant), an undertaker who's feeling mildly bored and unfulfilled by his entire life, until he fortuitously meets an aspiring actress who lives in LA on a cloudy English day, and more or less immediately decides to follow her out to LA, and win her heart. It's an almost astonishingly far-fetched premise, (even with his boredom, this doesn't really seem like the kind of thing a normal person would do), and yet, once he gets out to LA, everything that happens to him really seems exactly like what would happen to an unprepared Englishman who follows a fame hungry girl out to LA.

I mean seriously, everything we've been conditioned to expect from the city of angels is here: the sleazy photographer, the asshole agent, the asshole director, the wannabes, the think-they-already-ares, and the aspiring actresses working as waitresses. Everyone's trying to be somebody, and they're trying so hard that they forget to look at who they already are. I'm getting pretty deep into this, and that's not really what this film is all about- it's ostensibly a comedy, and it has genuinely funny moments, but at the same time, there's always a darker underbelly, a desperation seeping through everybody's actions.

Nowhere is this more apparent than in Barbara, Richard's dream girl. In spite of knowing nothing about her, he chases her across thousands of miles, certain that she's the one for him, when in fact he really just wants a brand new life. For her part, she's pounced on the fact that Richard's a sometimes writer, turned him into something much bigger to make her prospects sound better, and in general doesn't really care much about him. I think that, for her part, she's flattered that he's followed her across an ocean, but at the same time always has one eye on her career prospects- she's willing to keep this one guy interested in her, because one day, he might be somebody too. It's a little frustrating that the film is shown entirely from Richard's perspective (although the title is fully about him and all) because I feel like Barbara's story is much more complex and desperate than she gets credit for, and certainly than Richard even cares about.

So, I did get all deep there, but really, this is a great film, and it's really funny. Tennant is great, Johnny Depp's cameo is definitely worth seeing, and everything you ever thought you knew about Los Angeles is absolutely, and fully confirmed. I'm really sad that this kind of can't be bought anywhere (I rented it from LoveFilm) and that hardly anyone will get to watch it, because I really think it is a lost little gem. So, if you can, try and hunt it down, and give it the attention that it deserves- you won't regret it.
Posted by Laura at 11:52