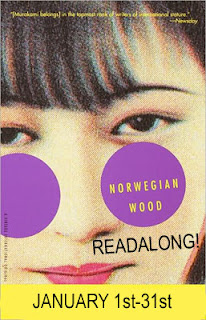 It just took me like 3 attempts to spell Murakami in the title right there, and I'm still not wholly convinced I've spelt it right, so you could say that there isn't much 'Murakami and Me' to discuss. And there isn't, much, except that ever since I started book blogging (most of which is discovering other blogs to read!) it seems like his name has been everywhere, at least on most of the blogs that I really love. Some of this is to do with the fact that he released a MONSTER of a book last year (1Q84) but even before that, his name was around everywhere, and I was intrigued. Veeery intrigued!

So, I still haven't read any of his books, despite this intrigument and also despite the fact that he's Japanese which clearly makes him awesome, and I really should have gone and bought all of his books after reading that first review. STUPID ME! I have, though, read a short story of his in The New Yorker (which is most likely part of one of his novels because they like to do that instead of making people actually write short stories, it seems) and I liked it. This all bodes very very well for reading Norwegian Wood!

The only actual things I know about Norwegian Wood are: 1) Its title is because of the Beatles song of the same name, which clearly means that it has to be awesome, and 2) The trailer for the film, which I watched for some weird reason on a DVD, is actually stunning and makes me really want to see the film, which I guess is the job of film trailers, so GOOD WORK whoever put it together! I realise that neither of these is a really good reason for reading the book, but, you know, shut up. And also, hello, READALONG. It's all about the camaraderie and reading the same book and then saying fun/actually mean things about it (you all watched me read The Help, right?). So there.

So, yeah. This was really a bit of an introduction to the readalong that Alice is hosting this month (you should probably go and read her post right now, because past experience teaches us that it will be awesome/hilarious) and now you all know I'm a Murakami virgin. My horrifying secret is out! January will clearly deflower me, and hopefully it will be pleasant! And if not, well, I guess it'll still be better than The Help. Because most things are.
Posted by Laura at 12:45